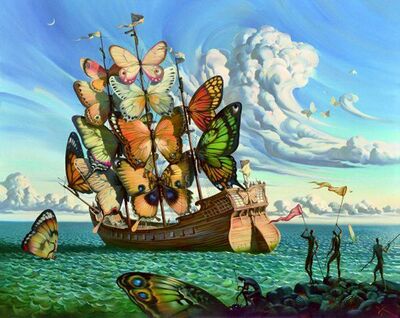 Departure of the Winged Ship by Vladimir Kush (2000)

Any work whose creation seems to have involved large amounts of hallucinogens, cocaine, crack, or any other illicit substance that makes people think really weird ideas are also really good ones. The plot hinges on bizarre transformations, freakish-looking creatures, and nonsensical actions that only seem to make sense in realms of logic far removed from your own. That it was the product of a deranged mind looks like a foregone conclusion.

And then you find out that it most certainly wasn't.

Note that in real life, composing any work of art (or doing anything more complex than opening a door, for that matter) is borderline impossible when tripping on hallucinogens like DMT or mescaline. Sufferers of manic disorder exhibit symptoms that are similar to those of drug intoxication, and quite a number of magna opera are created under such circumstances. Most admitted users of entheogens tend to do their work between trips, not during. And stuff like cocaine doesn't actually make you hallucinate or think trippy things, though it does make doing more cocaine sound like a fantastic idea. However, if a creator does manage to produce a work while (or shortly after) being under the influence of a mind-altering substance, this is the equal and opposite trope, Made on Drugs.

Commonly uttered in response to a Widget Series, Non Sequitur Scene, or Dada Ad. Compare with Mind Screw and of course This Is Your Premise on Drugs. See Made on Drugs for when it really was. Can also overlap with Better Than It Sounds. And enjoy this Onion AV Club inventory of notably trippy children's shows.

Examples of What Do You Mean It Wasn't Made on Drugs? include:

Retrieved from "https://allthetropes.org/w/index.php?title=What_Do_You_Mean_It_Wasn%27t_Made_on_Drugs%3F&oldid=1967438"
Categories:
Cookies help us deliver our services. By using our services, you agree to our use of cookies.