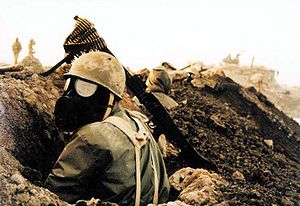 It's World War I in the Cold War!

The Iran-Iraq war [1], in spite of its fury and length, has largely been passed over by world media, and indeed works set in it are rare these days outside of Iran. (Iraq, for understandable reasons, doesn't have much of a film industry.)

For later installments of "Persian Gulf War", see the Gulf War and the The War on Terror.

Much of the Middle East was drawn up arbitrarily in the aftermath of World War I by the allies, Iraq itself was created by Britain out of the ruins of a large chunk of the Ottoman Empire. The new territory was majority Shi'ite, the majority denomination in Iran, and included territories that Iran claimed for itself; however, the new territory had to be given to the Sunni Prince Faisal of Hejaz, to whom Britain had promised Syria and then stood idly by when France conquered it from him. The prince proceeded to pack the Iraqi elite with fellow Sunnis, to Iran's dismay. Iran also included territories claimed by Iraq, notably the oil-rich Khuzestan--part of which was a majority-Arab that had even previously been called "Arabstan" for quite some time.[2] Iraq and Iran both supported insurgent groups in each others' territories. The border dispute remains unsolved to this day.

Ironically, in 1978, it was Iranian spies that informed Saddam Hussein (then vice-president) of a pro Soviet coup plot, allowing Saddam to initiate a purge and solidify his position. Ties between the countries briefly improve.

In 1979, the Islamic revolution occurs in Iran, the pro US monarchy is overthrown and replaced by a new theocratic state. In Iraq, Saddam Hussein takes over the office of President. Over the next two years, ties between the two countries deteriorate, by 1980 Saddam is actively incorporating allusions of the Islamic conquest of Iran centuries ago. Iran denounces the Iraqi regime as a "Puppet of Satan" (please recall that the Islamic Republic called the United States the "Great Satan" and Israel the "Little Satan." Make of that what you will).

Iran is in turmoil by 1980, its army is purged by the mullahs, the US suspends supply of spare parts and its Air Force is crippled, the new regime sidelines the traditional military in favor of new, ideologically motivated militias, such as the Pasdaran--"The Revolutionary Guards." The Iranian embassy in London is attacked by Iraqi sponsored terrorists. A series of terrorist incidents in Iraq culminates with the failed assassination attempt of its foreign minister. In September 1980, Iraq invades.

The Iraqi blitzkrieg pushes deep into Iran, both countries cities facing nightly bombing raids. The Iranian military finds itself heavily outnumbered initially, and the Revolutionary Guards are unwilling to cooperate with the regular army and so Iranian forces are uncoordinated and will remain so till the end of the war.

By 1981, the Iraqi offensive stalls. The Sunni tribes of Iran, rather than rising against the Shia regime as Saddam imagined, fought Iraqi forces every step of the way. In spite of the American embargo, the Iranian Air Force still manages to deny Iraq supremacy of Iranian airspace. An estimated 200,000 Iranian reinforcements had arrived by November, the majority being 'ideologically motivated' militiamen. By 1982, the Iraqi army is in full retreat, and Saddam orders Iraqi forces to build defenses along the Iran-Iraq border.

In June, Saddam Hussein, mediated by Saudi Arabia, offers a ceasefire deal to Iran. Iran rejects it, declaring that they would "continue the war until Saddam Hussein is overthrown so that we can pray at Karbala and Jerusalem." This may seem ludicrous, but keep in mind that Iraq still occupied significant portions of Iranian land at the time. A ceasefire is not the same as a treaty, and no Iranian trusted Saddam to keep the peace.

In July, Iran invaded. They found Iraqi forces well dug in and supported. In scenes eerily reminiscent of World War One, human wave attacks crash against trenches and are gunned down by machine gun nests. Coordination between the army and the Padaran militias broke down completely, and so human wave attacks were launched with no armor and artillery support, with regrettable results. A tactic used in this advance noted throughout the world was the encouragement of heroism among young Iranian basij volunteers who sought martyrdom in human wave attacks on Iraqi positions. The volunteers were inspired before battle by tales of Ashura, the Battle of Karbala, and the supreme glory of martyrdom, and sometimes by an actor (usually a more mature soldier), playing the part of Imam Hossein himself riding a white horse, galloping along the lines, providing the child soldiers a vision of "the hero who would lead them into their fateful battle before they met their God."

An American effort was launched to resupply and revitalize the Iraqi army after its defeat in Iran, large loans were given to help Saddam. On the other side, the Iranian logistic situation was deplorable, tanks ran out of fuel, artillery ran out of shells and lacking minesweeper equipment, Iran used child soldiers from the Padaran, who were given plastic 'keys to heaven' and ran across minefields en masse to clear them. Each major operation saw the loss of tens of thousands of Iranian soldiers, Saddam started to use chemical weapons and mustard gas at this point, seeing further losses among the Iranians.

Despite terrible logistical scenarios, both countries continued to launch offensives against one another, the majority of them ending badly for them. Iran started getting supplies from North Korea, Libya and China, while the Iraqi's had more suppliers, mainly in the form of the United States, the Soviet Union and NATO.

Over 1983, Iran launched five major offensives all of where repulsed with heavy casualties, estimated to be around 250,000 for the Iranian, unknown for the Iraqis (Saddam claimed 10,000, likely more than 5 times that.) By the end of 1983, Iran still refused to negotiate.

In 1984, Saddam initiated a large aerial offensive, strategically bombing a dozen Iranian cities, Iran responded with its own bombing and intercept campaign. This would become known as the first "War of the Cities". In February of the same year, Iran launched an ambitious two pronged offensive, Operation Dawn and Operation Khaibar, which came close to breaking through Iraqi lines and came within 25km of cutting off the main Iraqi supply lines, but the Operation ultimately failed to break Iraqi forces. Significant Iraqi territory was lost, including the strategically important Maijun Islands. A Iraqi counterattack failed to retake any ground.

By 1985, Iraq enjoyed widespread military and financial support, not the least of which were from NATO and the Warsaw Pact. Saddam ordered a offensive, but it did not produce any gains, and Iran launched a counter-offensive, Operation Badr, which succeeded in capturing vital highway routes between Baghdad and Basra, one of the primary objectives of Operation Dawn. Iraqi forces retook the routes after heavy chemical attacks and launched another air and missile campaign against Iranian cities, the second War of the Cities.

1986 largely passes in stalemate; small scale attacks are launched by both sides. The air war, however, raged unabated. By now, it was clear that the Iranian air force was superior, so Iraq switches to SCUD missiles and uses them against Iranian cities.

1987 saw the final Iranian offensives of the war, Operation Karabala was an attempt to capture Basra and pave the way to a push into Baghdad, and ultimately failed after the month long Battle for Basra. Operation Nasr was an attempt to take vital Iraqi oilfields, and was also repulsed after heavy fighting. The UN Security council passed Resolution 598, calling for a ceasefire, Saddam accepted but Iran still believed that Iraqi forces were on the verge of collapse refused, and so the fighting continued. US forces, in retaliation launched a Naval invasion of Iranian waters.

In 1988, a US warship shot down Iran Air Flight 655, resulting in the death of 300 people, apparently during a blotched covert operation. Iraqi forces, regrouped and revitalized by NATO and Saudi support, launch a major offensive and retake much of the territory lost over the past 5 years and show marked success against the previously superior Iranian air force. Iran found itself unable to procure the equipment needed to counter this new escalation and faced the prospect of American forces entering the war, and so in July 20, it signed the Ceasefire accord.

After the Ceasefire, an anti-government group inside Iran starts an armed uprising against the government, supported by Iraqi fighter bombers. Iraq also launches a surprise offensive into Iran. However, widespread censure and the threat of Soviet and NATO intervention forces Saddam to relent and the uprising is crushed. The war is over.

The war was very costly in terms of people dead, infrastructure destroyed and debts incurred, for both countries. Iran's casualties numbered at over 1 million and Iraqi casualties numbered 400,000-500,000, and this is excluding an unknown number of civilian deaths. Iran and Iraq both incurred debts of over 600 billion US dollars, and much of Iraq's oil production infrastructure was in ruins. And all of this was for zero territorial gain for either country.

Politically, it was inconclusive. Both sides claimed victory, Saddam had successfully held on Basra throughout the war and Iran had defeated the initial Iraqi invasion and if they had won the Battle for Basra, would have reached Baghdad. Both sides failed to achieve their stated goals, however.

In Iran, the Islamic revolution had grown ever more radicalized over the course of the war. Their leaders never forgot US support of Saddam, blaming it for cheating them of victory.

With its oil production crippled, Iraq found itself unable to pay off any of its debts, the largest amount being owed to Kuwait and Saudi Arabia. This eventually drove Saddam to order an invasion of Kuwait, which resulted in the First Gulf War, wherein the Iraqi army was all but destroyed by an international coalition. Over the next decade, Saddam would slowly lose his grip on power and his own country.

Retrieved from "https://allthetropes.org/w/index.php?title=Iran-Iraq_War&oldid=1957267"
Categories:
Cookies help us deliver our services. By using our services, you agree to our use of cookies.