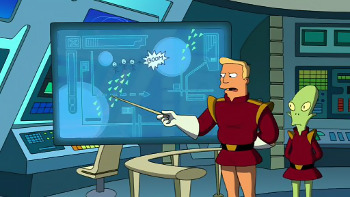 "Like all brilliant plans, my strategy is so simple an idiot could have devised it. On my signal, all ships will file directly into the enemy death cannons, clogging them with wreckage!"

They are ruthlessly efficient. They apparently have no trouble recruiting the vilest, evilest, nastiest, deadliest scum of the earth into their ranks. They are dedicated to power and glory and Taking Over The World! Against them, the world's only hope is the best of the best, frequently equipped with the latest weapons and an unlimited budget. In the end it comes down to the bravery, daring, skills and luck of the good guys...

...well, it would if the enemy leader wasn't a complete moron.

For some reason, villainous organizations which have no problem with kidnapping, blackmailing, threatening the destruction of the world, or even kicking puppies, somehow tolerate having an idiotic leader whose inept schemes for world domination are always foiled, often because of the utterly bizarre plans and implementation that General Failure himself is responsible for. Oh, they might bitch and moan about the dumb ideas, but it's not like they'll ever do anything about it.

Occasionally, The Watson, the Meta Guy, or other Genre Savvy characters will question the Big Bad's ludicrous schemes, but since they're not in charge, that will be it. Very often The Starscream is the only one who opposes the leader at all, making him look like the Only Sane Man on their side.

Common phrases of the general usually include "I wrote the manual on military tactic X" or "This reminds me of the time we fought enemy X in an improbable location, what a tale that is!".

General Failure may have started out as a competent commander in a position of less importance, and his success led to him being promoted beyond his capabilities. If this is the case, then it's a military example of The Peter Principle.

Most of the time the leader is also a Bad Boss, which can lead to We Have Reserves. One wonders sometimes if the good guys are secretly making sure the doofus on top stays there. General Failure is essentially the personification of Failure Is the Only Option, and is the eventual destination of severe Villain Decay. He often bears similarities to The Neidermeyer, but on a much higher scale. Compare Armchair Military, Miles Gloriosus, Modern Major-General.

No real life examples, please; calling somebody incompetent is rarely a good idea; and is even less a good idea when the person has access to heavy weaponry.

Examples of General Failure include:

Retrieved from "https://allthetropes.org/w/index.php?title=General_Failure&oldid=1886383"
Categories:
Cookies help us deliver our services. By using our services, you agree to our use of cookies.