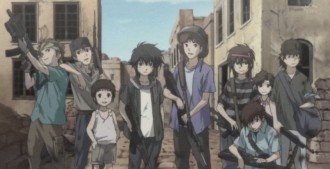 They depend on us to defend them, but we're forcing them to defend us. Sometimes they have an actual talent to help them get through the war, which unfortunately may be the reason they were drafted to begin with, but often it's just tough luck. While the notion of innocent childhood is a relatively modern adoption (thank the Victorians and their contemporaries), even the ancients still felt fairly queasy about the idea - and with good reason: warfare screws with kids heads, and they're rarely good for much else afterwards. Since the use of child soldiers forces the enemy to gun down children in self defense, it's a very strong contender for the most morally reprehensible war crime in existence. On a somewhat lighter side, there are also many stories, in fiction and real life, about boys (and girls) who lied about their ages in order to serve their countries.

This trope is great for an angsty backstory while at the same time excusing Improbable Age with prior experience. It can be a result of most of a country's men being dead or a severe numbers disadvantage. A staple of the shows which focus on violence but broadcast to kids, notably the more serious Mecha Shows. It's a good way to subvert Children Are Innocent, particularly if a kid creepily sees it as a game, but sometimes the loss of innocence is played for as much drama as can be.

In fiction, this also has the convenience of explaining why Persons Of Mass Destruction are obeying their weaker bosses and not actually running things, or at least not demanding wages and better job conditions. It doesn't occur to them; and even if they do rebel, they don't know how to do it properly.

This trope blends imperceptibly with New Meat. Since even legal adults can be teenagers, old soldiers in particular may regard them as no more than children. This trope is Truth in Television; many armies in Southeast Asia, the Middle East, and Africa have underaged troops. Furthermore, even Western countries such as Germany, Russia, and the United States have overlooked recruitment ages in major conflicts such as World War II. This was likely to happen before the late 20th century, because births were not as well documented and the recruiters took them at their word if they looked about the right age. Though it's frowned on by Western culture, there is a certain brutal logic to conscripting youth - everyone is under threat, so everyone fights. Sometimes the children are better off on the front lines than enduring what would happen to them if the enemy takes their village. As a more pragmatic and ethical solution, many countries that feature soldiers in the 16-19 age range often utilize them in noncombat or support roles, and/or continue to train them until they're older, resulting in far better psychological health, effectiveness of personnel, and morale overall.

Some Super Soldiers probably started out early enough to be counted as this. The Tyke Bomb (of all varieties) is what happens when this trope backfires.

Contrast Falling Into the Cockpit, which usually implies no former military experience. See Plucky Middie for the naval version. See also Raised by Orcs for cultures that use their enemies children this way.

Very much a Truth in Television.

Examples of Child Soldiers include:

Retrieved from "https://allthetropes.org/w/index.php?title=Child_Soldiers&oldid=1816616"
Categories:
Cookies help us deliver our services. By using our services, you agree to our use of cookies.