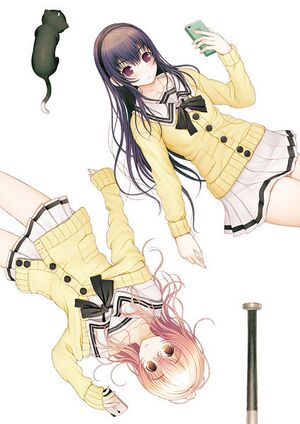 Kimi to Kanojo to Kanojo no Koi. (君と彼女と彼女の恋。- The Love Between You, Her, and Her) is a 2013 Visual Novel by Nitroplus, about the relationship between a Ordinary High School Student, his Childhood Friend and a Cloudcuckoolander. It's only available in Japanese, albeit it has been licensed by JAST USA for an eventual release in English.

Susuki Shin'ichi, frustrated with his daily routine, attempts to teach the weird Mukou Aoi how to socialize with people. When that doesn't work out (Aoi's past-time is chanting "touarururururu~" messages to "God" on the school's rooftop), he asks the popular Sone Miyuki for help, and they eventually spend time together at school. But feelings begin to appear, and a Love Triangle emerges...

Tropes used in Kimi to Kanojo to Kanojo no Koi include:

YOU think you can just load a save and start over, right?
—Miyuki