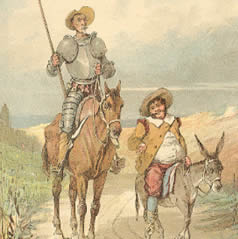 Jewelers often put shiny metal foil underneath a gem to make the stone shine brighter. A literary foil is someone who highlights another character's trait, usually by contrast, but sometimes by competing with him, hanging a lampshade, making snarky remarks, or egging him on.

Sidekicks often serve as foils to the hero by being something the hero himself is not (a calm and pragmatic sidekick when the hero is hotheaded, for example). In the classic good-guy versus bad guy scenario, both the hero and villain can each be considered the other's foil, in that each acts to show how the other behaves in certain situations.

These are far from the only possible pairings, however, as virtually any story with multiple characters can contrast the characters to show greater depths to them, regardless of what side they are on in the good versus evil equation. Good versus evil doesn't have to come into the picture at all.

Many intentional foils are depicted as physical contrasts to the main character. Thin vs. fat and tall vs. short are among the most common ways of setting up a contrast. Similarly, when the hero's Love Interest is blonde, the villainess tends to have dark or red hair; when the villainess is blond, the hero's Love Interest tends to be dark or red haired.

As implied earlier, virtually any two characters or character types can serve as foils to each other if they're put together properly and a little good writing goes into them. However, there is a surprisingly large number of character types that exist primarily for the purpose of being a foil, usually to the main character, or in the case of a set of characters, to each other.

If you're feeling a little poetic and look around at your surroundings enough, you'll probably discover that this trope is a bit of Truth in Television.

Nothing to do with fencing or the preferred headgear of a Conspiracy Theorist. See also Duo Tropes.

Compare Shadowland, which applies to settings.

Examples of Foil include:

Retrieved from "https://allthetropes.org/w/index.php?title=Foil&oldid=1894513"
Categories:
Cookies help us deliver our services. By using our services, you agree to our use of cookies.