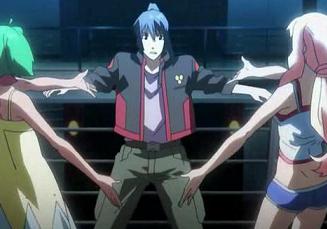 A is in love with B, but B is in love with C, resulting in wacky hijinks. Alternatively, A and B are both in love with C, who is torn between the two and must make a choice. In the latter case, A and B tend to be Betty and Veronica; in the former, A will usually be a Romantic False Lead or Hopeless Suitor.

Can sometimes lead to A stepping back because They Just Want Their Beloved To Be Happy. Alternately, A is a total jerk or Clingy Jealous Girl, making it completely okay for B to get C. Of course, A could just engage in a bit of Relationship Sabotage, perhaps even to the point of Murdering The Hypotenuse, but that would be overly cynical.

Note: More people than three, in more geometries, is still sometimes called a "triangle." The notion of more elaborate combinations is explored further in Love Dodecahedron.

There is an exploration of many but not all the possible triangles in Triang Relations. See also Two Guys and a Girl, Cock Fight, Wrong Guy First, and Unrequited Love Switcheroo.

Sibling Triangle is a special variant. Compare Friend Versus Lover.

God help you if you happen to get caught in a Psychotic Love Triangle.

Examples of Love Triangle include:

"I am so conflicted!"

Retrieved from "https://allthetropes.org/w/index.php?title=Love_Triangle&oldid=1957554"
Categories:
Cookies help us deliver our services. By using our services, you agree to our use of cookies.