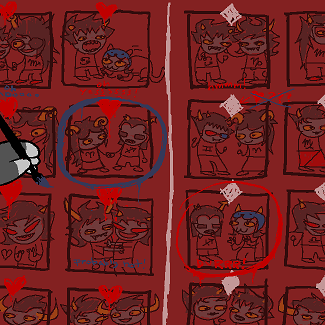 This is just the beginning, folks.

A character in a story actively ships two other characters in the story, trying to make them realize their true feelings while they're both still claiming that She Is Not My Girlfriend.

Could be someone in love with one of the character of the pairing but who wants their beloved to be happy, or could be a very good friend, or just someone who likes playing matchmaker. If everyone in the cast is shipping the same pairing, it becomes a case of Everyone Can See It.

Contrasting with The Matchmaker, the Shipper on Deck is usually a secondary character and the characters shipped are the protagonists of the story, and likely to be the Official Couple. Also contrast with Relationship Sabotage, where someone is trying to undermine a relationship that already exists (although the two can be part of the same plot quite easily, if the idea is to get someone out of one relationship and into another). Beware a Creator's Pet if this is the writer trying to reinforce a disliked pairing.

Examples of Shipper on Deck include:

Retrieved from "https://allthetropes.org/w/index.php?title=Shipper_on_Deck&oldid=1930320"
Categories:
Cookies help us deliver our services. By using our services, you agree to our use of cookies.