Everything About Fiction You Never Wanted to Know.
(Redirected from Mamotte Lollipop)
Jump to navigation Jump to search 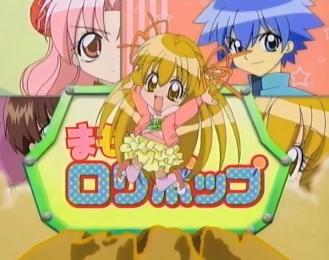 Mamotte! Lollipop is a seven-volume Manga series by Michio Kikuta, first published in the Nakayoshi family of magazines beginning in 2002. It was adapted as a 13-episode Anime series in 2006.

Seventh-grader Nina Yamada is eating cake outdoors with her friends and describing her perfect man (essentially an Ideal Hero) when she notices what appears to be a hard candy on her plate. She puts it in her mouth, noticing it's not particularly tasty, when suddenly some strange boys appear. In the excitement, Nina accidentally swallows the object. It turns out that the boys are trainee wizards participating in the professional wizard exam. The team of two that is in possession of the Crystal Pearl at the end of six months gets their licenses. And since Nina now has the Pearl inside her, that makes her the target of every trainee wizard around.

The first pair of wizards, Zero and Ichi, turn out to be relatively decent fellows, and decide that they will protect Nina until such time as the Pearl can be safely removed from her. A series of other wizard teams, of varying degrees of wackiness, also come after the Pearl. Hilarity Ensues.

A sequel, entitled Modotte! Mamotte! Lollipop was published in 2006, still in the same Nakayoshi magazines. It still follows the crazy adventure of Nina that is, once again, being chased by participants of another wizard exam because she, once again, swallows another crystal called Crystal Drop that is mandatory for passing the exam.

Of course, Ichii and Zero are still there to save Nina.

Tropes used in Mamotte! Lollipop include:
Retrieved from "https://allthetropes.org/w/index.php?title=Mamotte!_Lollipop&oldid=1552100"
Categories: