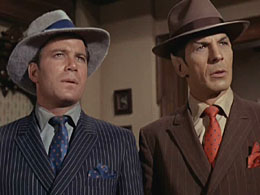 Going Native on the Planet Of Nice Hats.

On their Wagon Train to the Stars, our intrepid heroes come across a planet with a single defining characteristic. Everybody is a Robot, or a gangster, or a Proud Warrior Race Guy, or wearing a hat. To some degree, this is unavoidable; you only have so much screen time or page space to develop and explore a culture. But it's still very easily and often overdone. For maximum typing, the characters can also be physically uniform, as in People of Hair Color. Bonus Points if a planet's Hat is one that requires a Nice Hat.

Earth itself is sometimes portrayed as a Planet of Hats. The defining human characteristic is often "pluck" or "sheer cussedness" and sometimes even "diversity", though "bastardry" and "stupidity" are common in more misanthropic works.

Just for comparison, Earth has seven continents, hosting just under two hundred states, with an estimated five thousand ethnicities, with even more thousands of different languages and their varied dialects. There is no reason to suspect that alien life forms would be any different, but in media they are nowhere near as diverse as one might expect. Also, in the universe that isn't completely cardboard, placing too much of your eggs in a single basket is prone to turning into a strategical disadvantage. Which is why the species that aren't endemic remain diverse in the first place, of course: this ensures necessary minimum of adaptability.

Writers love to use the hat planet to represent controversial issues in society (or less often other "hot" topics of various nature) whenever they can. This way the characters can take a thinly disguised public stand on an issue that the network execs would otherwise consider too taboo to openly discuss. We can't have our heroes discussing euthanasia, but should they stumble across a Planet Of Hats where everyone who gets sick is put to death, then it's okay. Eventually the plots will run out with an entire race of identical people so one or more of the species will have their hat fall off, declaring My Species Doth Protest Too Much. Alternately, the show may explore why Klingon Scientists Get No Respect.

The Planet of Hats may also be an unintended result of a Character Exaggeration type Plot Tumor or Flanderization applied to an entire race, when the audience had previously only seen a single representative who the writers now wish to market. For cases where a planetary hat is extrapolated retroactively from a single character, see Planet of Copyhats. When done deliberately, hats can be flaunted by "tipping" them all the time ("Have I Mentioned I Am a Dwarf Today?") - or can be tipped lazily, in which case a character acts in the recognizable one-note caricature way for one scene, but once the hat is presented, doesn't feel need to touch it any more (it allows to combine the annoying sides of hats and "everyone is the same", while neatly demonstrating the writer is unable or unwilling to maintain consistency).

In an example of The Coconut Effect, the concept of the Planet of Hats has become so ingrained into popular culture that whenever an alien race is portrayed as not being uniform, identical, and homogeneous it typically results in complaints.

Occasionally semi-Justified Trope in settings with relatively convenient space travel. Many nations agree to use a single language (usually English) when they must operate in a multinational group. It is also reasonable to expect planetary colonists to be culturally and linguistically uniform.

If the Hat involves the Idiot Ball, you end up with an Idiot Plot.

Possibly Truth in Television, with people saying that all mice like cheese, all dogs hate cats, all Humans Are the Real Monsters/Humans Are Special, etc.

Compare Gang of Hats. Contrast Multicultural Alien Planet. See also Rubber Forehead Aliens, Intelligent Gerbil, Scary Dogmatic Aliens. May result because Apathy Killed the Cat. If the planet's hat is being evil, it's an example of Exclusively Evil. Serious Business is what happens when the show's setting gets a hat. This trope in itself is a good example of Sci-Fi Writers Have No Sense of Scale. See Single Biome Planet when the planet is unnaturally uniform physically. One Product Planet is a subtrope, but focuses on economics rather than culture. Country of Hats is another subtrope, on a smaller scope with a tighter focus.

Has nothing to do with a certain war-themed hat simulator. The web comic was probably named after the trope; David Morgan-Mar is a self-confessed troper.

Examples of Planet of Hats include:

Retrieved from "https://allthetropes.org/w/index.php?title=Planet_of_Hats&oldid=1886882"
Categories:
Cookies help us deliver our services. By using our services, you agree to our use of cookies.