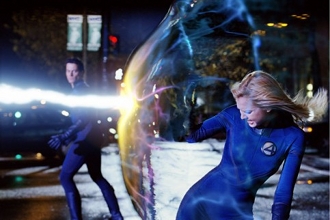 The Barrier Warrior is a character with the Magic and Powers necessary to create Deflector Shields or Beehive Barriers to protect themselves and sometimes others. The Barrier Warrior fights enemies with an emphasis not on destruction, but on protecting, and their personalities reflects this by being kind and caring, with Actual Pacifist tendencies and sometimes Healing Hands to go with their defensive abilities. It should come as no surprise that characters with this ability as their main or only power are, you guessed it, heroes. Usually, they're The Chick, a Squishy Wizard or The Smart Guy. In video games they specialize in protecting and aiding team mates, or "buffing", rather than damaging enemies.

Despite these good intentions and potent abilities, they'll pretty much suck at actually doing stuff like beating enemies or worse, protecting their allies! The problem is that their transferable Nigh Invulnerability and ease in resisting attacks that Could Have Been Messy makes them the perfect target for The Worf Effect. As soon as a new bad guy shows up, their shields will pose all the resistance of wet tissue paper to their weakest Energy Blasts.

Less commonly, it can occur that Heart Is an Awesome Power, and the Barrier Warrior will be a fierce fighter on an equal footing with other more aggressively powered cast members. This is done either by cleverly using his shield to trick or outmaneuver enemies, help teammates, or by using it in conjunction with other fighting skills and abilities to actually beat up enemies. A barrier could also be sent forward to attack enemies—if it can stop bullets, it's going to hurt if it runs into your face. The more deadly form of this would be to crush someone with the impenetrable shield. But who ever heard of a villain with barrier powers? If you can control the shape of the barrier, you could hypothetically give it sharp edges as well.

As a power, generating Deflector Shields is much like Flight. In theory it's an awesome power that anyone would like, but like Flight it has become a dime a dozen and pretty lame. Most shows give every character this ability as a secondary power/skillset from a character's main abilities (such as a geokinetic blocking attacks with boulders, or a cryokinetic making ice walls). It's made even more useless since it's easy to deflect Ki Attacks with other Ki Attacks, and techniques like Deadly Dodging are around to avoid most attacks.

On the flip side, writers who notice this have used Re-Power to make these characters incredibly versatile and lethal as well, since it functions like an Imagination-Based Superpower, which often involves Spontaneous Weapon Creation.

Frequently their barriers manifest depending on their morality (and may even change appearance if they change sides). It's either as beautiful (and deadly) Petal Power or gently glowing spheres, or black barriers that crackle ominously.

Not to be confused with Barrier Maiden, though the two can overlap if the Maiden's method of containment is via forcefield.

Examples of Barrier Warrior include:

Retrieved from "https://allthetropes.org/w/index.php?title=Barrier_Warrior&oldid=1794849"
Categories:
Cookies help us deliver our services. By using our services, you agree to our use of cookies.