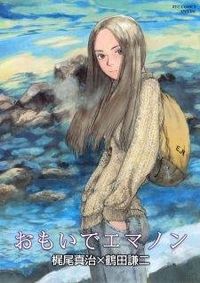 Memories of Emanon is a one-shot manga based on a novel by Shinji Kajio. The story takes place in 1967 Japan, with the nameless 20-year old narrator returning home from his travels after his wallet gave out. On the ferry back home, he encounters a cool, mysterious girl in blue jeans with a cigarette in her mouth. Her pack has the initials E.N. on it, but she tells the narrator to call her Emanon. She invites him to dinner, and they begin to talk to kill the time.

After making an off comment about remembering an event that by no means Emanon should have experienced, she decides to tell the narrator, a sci-fi fanatic, her background, saying he can choose to believe it or not. It turns out that Emanon is the inheritor of Genetic Memory that gives her the knowledge and memories of everyone in her maternal line of ancestry, including the ones that weren't human, or even multi-cellular. The narrator and Emanon discuss the possibilities and potential reasoning behind these memories, and about life in general. After claiming it was just a story, Emanon vanishes the next morning leaving the narrator with just a note. Life goes on for the narrator, but he never forgets that night, and wonders how his life would have turned out differently if he hadn't parted ways with Emanon.

The manga has been fully translated, but you have to dig around a bit for it. There's a sequel called Sasurai Emanon, which hasn't been translated, that follows Emanon through the rest of the 20th Century.

Tropes used in Memories of Emanon include:

Retrieved from "https://allthetropes.org/w/index.php?title=Memories_of_Emanon&oldid=1362885"
Categories:
Cookies help us deliver our services. By using our services, you agree to our use of cookies.