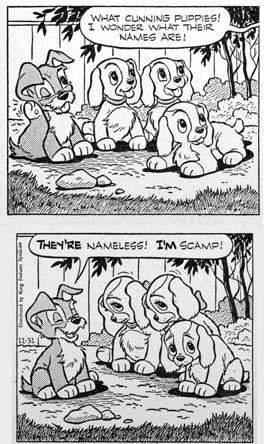 Can you say Parental Favoritism?

A major character is never referred to by their actual or full name, instead being addressed by a title, nickname, or Only One Name. Reasons for this vary, but it often serves the function of making a character seem more mysterious or eccentric.

In older (pre-1900 in North America; pre-1970 in the UK) fiction, a narrator may refer to a character (especially an older or more socially prominent character) by his or her surname. This is because at that time first names were much less commonly used socially than they are now; a young character may not even know the first name of an older character he or she is not related to. It was also common in that time to blank out the names of real people to avoid lawsuits and the like.

A common joke is to do The Un-Reveal on the full name.

This trope can be somewhat justified, however, due to Nominal Importance: It's difficult enough for the writers to come up with good names for the main protagonists; it would be incredibly painstaking to come up with equally good names for a cast of characters who exist solely as part of the setting and serve no further purpose to the narrative.

Another common variation is for a series where a child is the main character to have parents only referred to as Mom and Dad.

Sometimes, a main protagonist will have no name to add to their mystique.

When this trope is applied to work titles themselves, not just character names, it's No Title.

Compare The Trope Without a Title, You Know the One, and I Know Your True Name (which may be a reason for this). Contrast Only One Name, Everyone Calls Him "Barkeep", and I Am Not Shazam. See also Nameless Narrative.

Examples of No Name Given include:

Retrieved from "https://allthetropes.org/w/index.php?title=No_Name_Given&oldid=1918648"
Categories:
Cookies help us deliver our services. By using our services, you agree to our use of cookies.