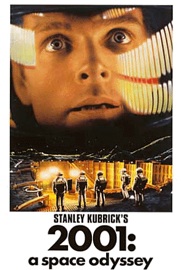 A 1968 science-fiction film, written and directed by Stanley Kubrick, with help from Arthur C. Clarke (who also wrote a novel version in tandem with the film's production), and inspired in part by Clarke's short story "The Sentinel".

The film's story tracks long-term human evolution as it is influenced by unseen Precursors. An ill-fated expedition is dispatched to Jupiter, where the astronauts soon realize that their computer has reached critical intelligence levels. The film's disturbing finale is particularly famous for seeming to be a Gainax Ending at first, but actually being a perfectly logical Mind Screw.

Still one of the "hardest" sci-fi films ever made. Features perhaps the most famous Match Cut ever to appear in American popular culture. It is also known for its very slow pacing and enigmatic plot.

Tropes used in 2001: A Space Odyssey include:
Retrieved from "https://allthetropes.org/w/index.php?title=2001:_A_Space_Odyssey&oldid=1963075"
Categories:
Cookies help us deliver our services. By using our services, you agree to our use of cookies.