Who Wants to Live Forever? 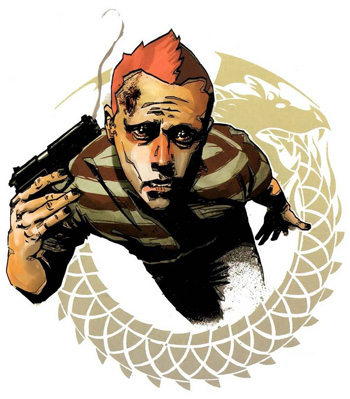 Put your hand down. This is not a vote. (sigh)

The worst fate possible might well be Immortality. Sure, you might like the idea that you get to live forever and see what the world's like hundreds of years from now, but what's eternal life compared to the pain of life in general, from getting thrown in a Cold-Blooded Torture chamber, to the emotional anguish of seeing your loved ones die, one by one, as you stay fixed in time? See Analysis for more horrifying details.

When done Anviliciously, this can seem like Sour Grapes on the part of the very-much-mortal writers. May be used as a Fantastic Aesop.

This attitude toward immortality is Older Than Feudalism, going back at least as far as the Greek myths about Tithonos's Age Without Youth and Prometheus's punishme- is your hand still up!?

See Death Seeker for a similar mindset among the mortal. Compare Blessed with Suck for those that angst, as well as And I Must Scream for the mindset this can create. Contrast Living Forever Is Awesome for those who like it, Immortality Seeker for those who seek it, and Eternal Love where immortals fall in love. See Analysis for more horrifying details.

Examples of Who Wants to Live Forever? include:

T.S. Eliot used the entire quote, in the original mix of Greek and Latin, as an epigraph to "The Waste Land".

Okay, seriously, PUT THAT HAND DOWN.

Retrieved from "https://allthetropes.org/w/index.php?title=Who_Wants_to_Live_Forever%3F&oldid=1949683"
Categories:
Cookies help us deliver our services. By using our services, you agree to our use of cookies.