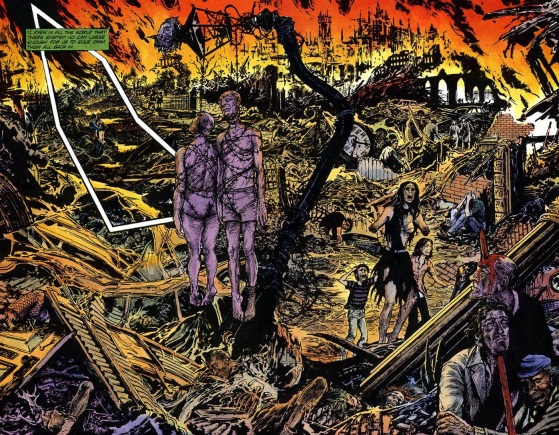 Miracleman began as Marvelman, a 1950s homegrown British Captain Ersatz version of Superhero Captain Marvel. After Alan Moore revived the character in the 1980s, the character turned into something quite different.

It all started when London publisher, L. Miller & Son, Ltd., had the rights to make reprints of American Comic Book Captain Marvel for the UK. However, when Fawcett Comics, publishers and right-owners of Captain Marvel in America, had to cease when DC Comics threatened to sue due to similarities to Superman, L. Miller was faced with the reprint material drying up. So, ironically, he had one of his writers, Mick Angelo, created Captain Ersatz versions of the character and his supporting cast. Marvelman's adventures lasted from 1954 to 1963, for about 350 weekly issues.

In 1982, Alan Moore was hired to produce material for Warrior magazine; one of the properties given to him was Marvelman. Moore, in similar fashion as he did to Swamp Thing at the time, radically reinvented Marvelman: the original Marvelman comics were revealed to be dreams created by a machine to train Marvelman and that the British Government ultimately betrayed him and tried to kill him, resulting in him losing all memory of being Marvelman for nearly two decades. When he regains his powers, the hero goes about changing the world no matter what, while fighting with his now batshit crazy former sidekick and long time arch-enemy, who turned out to be the man who created his powers.

Sadly Warrior stopped publication about one-third through his run; the series would have remained lost and unfinished if not for Eclipse Comics, who offered to buy the US rights to the property and let Moore finish the series. Unfortunately, Marvel Comics was not thrilled with Moore and the fact that his character was called "Marvel"man. So the character was changed to Miracleman. Miracleman debuted in 1984 to rave reviews, though there would be much problem: Eclipse Comics had its corporate headquarters destroyed in a flood (which in turn destroyed most copies of Miracleman #15, the penultimate issue of the Moore run and featuring his legendary final showdown with the newly renamed Kid Miracleman),and Alan Davis (the original artist for the series) left over the fact that Moore's antagonistic relationship with Marvel Comics threatened to get Alan Davis blacklisted from working in the US. Several artists were called in to draw the rest of Moore's run (along with an issue that reprinted classic Miracleman stories, something that the book's editor replied was only being done because they absolutely had to have the book be back on schedule), including Steve Bissette and Rick Veitch of Swamp Thing fame and Chuck Austen (yes, THAT Chuck Austen). Moore ended his run with issue #16, as Miracleman, after defeating Kid Miracleman and witnessing the destruction of London at the villain's cruel hand, decides to take over the world and bring about utopia, with help of a group of heroes he had recently met. The final issue would show that Miracleman succeeded in his goals, thought at the cost of his marriage and his humanity.

Alan Moore's run would be followed by Neil Gaiman, who sought to write a trilogy of stories (The Golden Age, the Silver Age, and the Dark Age) which would explore Miracleman's new order and its ultimate downfall. Sadly the book was cancelled again with the collapse of Eclipse Comics and Gaiman's story would be unfinished.

With the collapse of Eclipse Comics, the rights to the series fell into legal limbo hell, made worse with Todd McFarlane buying up ownership of Eclipse Comics assets when the company went down. [McFarlane drew much controversy in his desire to incorporate Miracleman into the Spawn universe and holding usage of the character and the chance to finish his story, as blackmail material to force Neil Gaiman (who thanks to Alan Moore, had partial legal ownership claim to the character) in exchange for Neil giving up his longstanding legal fight over ownership of popular Spawn character Angela and claims to royalties that were being withheld from by Todd. However, it would be for naught as it was revealed that the real rights were held by Mick Angelo, who due to a various number of loopholes with the British copyright system, had never signed away his rights to the characters and that the deal with Alan Moore for usage of the character in Warrior and at Eclipse Comic were invalid. Ironically, this allowed Marvel Comics to cut a deal to buy the rights to the entire franchise from Angelo (as well as the scripts to the 80s comic series, as the artwork has to be renegotiated since Gaiman still owned the rights to the Miracleman scripts).

As part of their deal and as a means to help out Angelo (who never saw a dime for his character in the years after Moore revitalized him and was terminally ill), Marvel republished several trade paperbacks of the original 1950s Miracleman series (now Marvelman again) in hardcover and mini-series format. This in turn brought back into the spotlight many characters that Angelo created that were abandoned by Moore in his revival, most notably Nastyman and Young Nastyman, a pair of Black Adam Expies. In 2014, Marvel began reprinting the Miracleman stories with new color, both as single issues and hardcovers, and will be continuing onto the Gaiman issues.

Tropes used in Miracleman include:
Retrieved from "https://allthetropes.org/w/index.php?title=Miracleman&oldid=1774393"
Categories:
Cookies help us deliver our services. By using our services, you agree to our use of cookies.