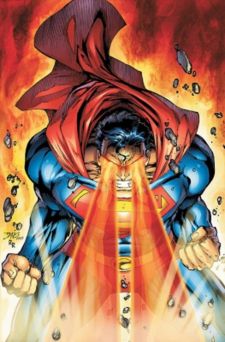 This is the stock power of the Mecha-Mooks and those with powers beyond mortal ken. Also, a stock joke about "laser eye surgery" fad, or a type of girder (I-beams).

(Seldom is it explained how a beam which can burn or injure just about anything else is contained when trapped behind the character's eyelids, but let's not think about that....)

Compare X-Ray Vision, Evil Eye, Breath Weapon, and Hand Blast. Often The Glasses Come Off for this. A favorite attack for the Oculothorax.

Examples of Eye Beams include:

Retrieved from "https://allthetropes.org/w/index.php?title=Eye_Beams&oldid=1964769"
Categories:
Cookies help us deliver our services. By using our services, you agree to our use of cookies.