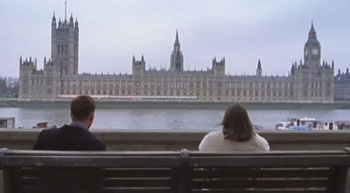 Nobody will notice us here!

Paradoxically, the best way to hide a secret meeting is often to hold it somewhere extremely public. Locations like this can be selected to be unpredictable to anyone who you might want to avoid, are almost certainly bug-free, and can provide a layer of plausible deniability when the people in question aren't supposed to be meeting each other at all.

The classic situation where this occurs is meetings between members of two different secret government agencies; in that case they're not only dodging eavesdroppers, they're also making it more difficult for either agency's goons to do anything untoward.

Stock locations for this kind of meeting include:

Of course, while this kind of meeting decreases the odds of being noticed by the specific people you're trying to avoid, it substantially increases the odds that your conversation will be overheard by random passers-by. This is generally glossed over, though sometimes it's nodded at by selecting an exceptionally loud meeting place, or by having the characters speak in some way that appears innocuous: Trouble Entendre, Talking Through Technique, Spy Speak, or the like.

Examples of Overt Rendezvous include: