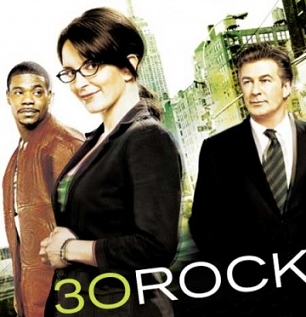 30 Rock is an NBC Work Com starring Tina Fey (also a writer and executive producer for the series), Alec Baldwin and Tracy Morgan. The show was launched in 2006. Due to its lackluster Ratings, adoring critics feared it would be Too Good to Last. Nevertheless, the show managed to last seven seasons and made out like a bandit at three consecutive Emmy Award ceremonies.

The series follows the life of the supposedly homely Hollywood Nerd Liz Lemon (Tina Fey more-or-less playing herself), who is head writer of a fictional Show Within a Show based on Saturday Night Live. "30 Rock" refers to a nickname of 30 Rockefeller Plaza, the address of NBC's New York headquarters where SNL is filmed, which is where the series takes place.

Liz Lemon is a Straight Woman who often crosses over into Deadpan Snarker territory and sometimes becomes an Unsympathetic Comedy Protagonist. This is pretty understandable considering that her job mainly involves dealing with:

A sizable portion of fanbase ships Jack/Liz, enough that the show has since sort of taken to simultaneously teasing/parodying the pairing. In any case, Tina Fey has said it will never happen.

Tropes used in 30 Rock include:

Retrieved from "https://allthetropes.org/w/index.php?title=30_Rock&oldid=1913251"
Categories:
Cookies help us deliver our services. By using our services, you agree to our use of cookies.