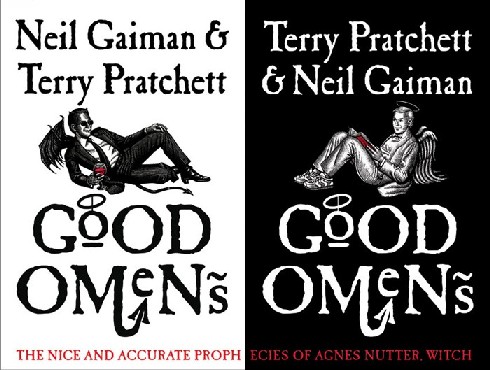 A novel about the apocalypse, in which The Antichrist is accidentally Switched At Birth and given to a normal family, where he grows up free from any influence of Heaven and Hell and becomes a completely normal and average child. Well, normal aside from the fact that he's subconsciously using his powers to make sure his small, quaint hometown stays small and quaint...

The mix-up causes plans for Armageddon to spin wildly out of control, as agents of both Heaven and Hell try to find out just why things aren't going as planned. Two of those agents, an angel (Aziraphale) and a demon (Crowley) who have formed a friendly rivalry (more friends than rivals by this point), are trying to find the Antichrist and put a stop to The End of the World as We Know It because they decided they like humanity. Also in the mix are the last witch-finder in England (and his new assistant), and a modern-day witch who is the heir to a book of oddly specific but still conveniently obscure prophecies.

Co-written by Terry Pratchett and Neil Gaiman, each at the top of their form. The pair considered working on a sequel, but aside from the potential title 668: The Neighbour of the Beast nothing ever came of this.

After years of speculations (and a legitimate fear for the project due to Pratchett's death in 2015), a six-episode miniseries starring Michael Sheen and David Tennant was released by Amazon Video in May 2019.

Some useful annotations for the inquiring (or nonplussed) reader can be found here.

Tropes used in Good Omens include:
Retrieved from "https://allthetropes.org/w/index.php?title=Good_Omens&oldid=1969745"
Categories:
Cookies help us deliver our services. By using our services, you agree to our use of cookies.