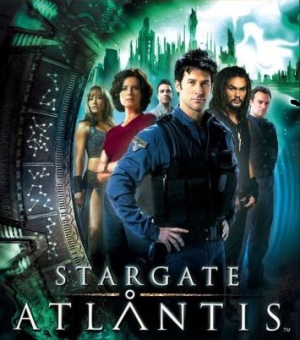 Stargate Atlantis is a spin-off of the popular sci-fi show Stargate SG-1.

SG-1 spent its seventh season searching for a "lost city", which they believed was actually a ship belonging to the Ancients. Finding a way to travel to the city via a very long Stargate jump to the Pegasus galaxy, an expedition was put together to assess the new location, what threats it may have and the radical leftover technology there might be.

Stargate Atlantis is similar in tone to Stargate SG-1, but is successful in distinguishing itself from its predecessor, partly through an intriguing new enemy in the Wraith and through being very much Fish Out of Water as they have little actual knowledge of how the city and its technology works. The character dynamics are inverted from its parent show, as Atlantis is a scientific research group with military support. The Mission Commander Elizabeth Weir is a civilian, as are most of the scientists and doctors, with John Sheppard being the head of the military support team.

The show branches off from Stargate SG-1 after the first episode of season eight, and continues for five seasons. It is currently set to continue through a series of tie-in novels.

Tropes used in Stargate Atlantis include:

Retrieved from "https://allthetropes.org/w/index.php?title=Stargate_Atlantis&oldid=1739411"
Categories:
Cookies help us deliver our services. By using our services, you agree to our use of cookies.