Panic! at the Disco

Everything About Fiction You Never Wanted to Know.
Jump to navigation Jump to search
/wiki/Panic! at the Discocreator 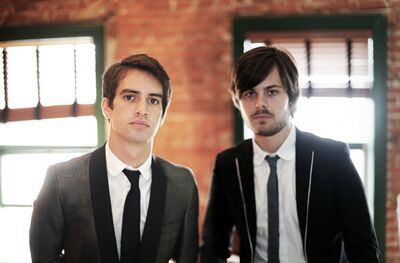 A band created in 2004 by childhood friends Ryan Ross (guitarist/main songwriter), Spencer Smith (drummer), and Brent Wilson (bassist), and later, joined by Brendon Urie (lead singer) and Jon Walker (who replaced Brent in 2006). They were discovered by Fall Out Boy's bassist Pete Wentz and signed to his vanity label, Decaydance.

Their name comes from a line in the song "Panic" by Name Taken, but due to the relative obscurity of this reference, the band usually cite "Panic" by The Smiths, which contains the line "Burn down the disco" in its chorus and is better known.

They are known for their quirky fashion sense, rampant stage gay antics, and longer than life song titles. Popular songs include "I Write Sins Not Tragedies", "The Ballad Of Mona Lisa", "But It's Better If You Do", and "Lying Is the Most Fun a Girl Can Have Without Taking Her Clothes Off".

As of July 2009, Ryan Ross and Jon Walker are no longer members and have formed their own band, The Young Veins.

Panic! at the Disco provides examples of the following tropes:

Tropes relating to the music and videos