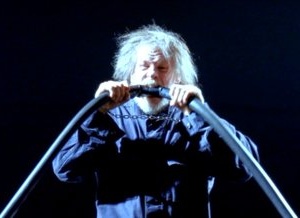 Nick Nolte takes it a bit too literally.

ACTING with EMPHASIS. Nearly any emotion will do here, so long as it's EXTREME!

A common term for a scene where an actor is acting so damn hard that they're picking bits of scenery out of their teeth for days. Actors who really go "all out" are said to chew the scenery. Sometimes scenes can actually require this, but more often the actor and/or director just has the character go over the top.

It's well worth noting that this trope is one of the biggest causes of memes.

While this can often be a bad thing and ruin a scene, just as often it can add to the fun, whether a work is So Bad It's Good or genuinely good. In a Police Procedural, this will often be due to a Perp Sweating or an Exasperated Perp.

This is a Super-Trope, which also includes:

Contrast Dull Surprise, for unusually emotionless moments, and Dramatic Deadpan, for when the emphasis is given precisely by the low key used.

Frequenty goes along with Berserk Button, Freak-Out, Laughing Mad and other exaggerated emotions.

Not to be confused with This Billboard Needs Some Salt (actually munching on the scenery).

Examples of Chewing the Scenery include:

Retrieved from "https://allthetropes.org/w/index.php?title=Chewing_the_Scenery&oldid=1859141"
Categories:
Cookies help us deliver our services. By using our services, you agree to our use of cookies.