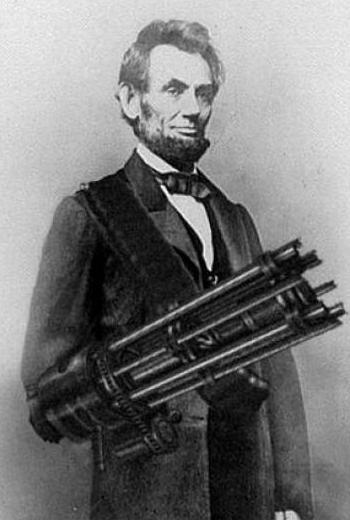 Retro-style Speculative Fiction set in periods where steam power is king. Very often this will be in an Alternate Universe where the internal combustion engine never displaced the steam engine, and as a result all manner of cool steam-driven technologies have emerged, ranging from the plausible to Magitek with a Hollywood Science Hand Wave or the power of The Spark of Genius. Largely, steampunk runs on Rule of Cool. Sometimes combined with the work of Charles Babbage on mechanical computers to produce a kind of retro Cyberpunk set entirely in the Victorian era or a close analogue, with Dickensian exploitation.

Steampunk may be a modern reflection of the 1930s–40s trope of The Gay Nineties, an idealized version of the 1890s. The term "steampunk" was coined by K. W. Jeter to describe the speculative fiction stories in a Victorian setting that he, Tim Powers, and James Blaylock were writing in the early 1980s in contrast to the Cyberpunk stories like Neuromancer that were saturating media. Steampunk's modern incarnation may be considered a reaction to the popular dystopias of that time: the positive power of the imagination and subversion of the New Technology Is Evil trope are common steampunk themes, although recent Steampunk is increasingly likely to deal with dystopian societies, sometimes even drawing upon the works of Charles Babbage to theorize humans with mechanical brains and other things rendering them Cyberpunk in all but backdrop.

Elements of steampunk that are set in the American frontier are usually referred to as "Cattle Punk". Some writers and fans refer to the "shiny happy" version as "Victorian Fantasy", "Gaslamp Fantasy" or "Victorian Futurism". Supernatural or paranormal tropes are more frequently included in this approach, in which case the Encyclopedia of Fantasy favours "Gaslight Romance".

Jules Verne, the first Speculative Fiction writer, is the king of this trope. He and H. G. Wells are often mentioned as the foundation of a literary steampunk's reading list.

If instead of industrial era technology, the setting has pre-industrial technology, see Clock Punk, and if it includes internal combustion engines in place of steam, see Dieselpunk, though there can be crossover between them if used purely asthetically. Many examples of Steampunk mix in a few mutated monsters (probably in homage to Charles Darwin living roughly in the era depicted), thereby bordering upon Biopunk. If it assumes the truth of Victorian-era science, it may also become an example of All Theories Are True. Visual media (and the real life Steampunk subculture) will never miss a chance to showcase some seriously Awesome Anachronistic Apparel, and for Fan Service's sake a woman in a corset must be involved at some point.

Of course, the difference in values between the Victorian era and the present are rarely mentioned, unless the work is emphasising the "Punk" side of things more than most of them do.

However, any Victorian-era society which actually tried to create steampunk technology would soon find itself in stark trouble. The power requirements necessary to make real-world versions of steampunk devices (or at least Victorian-era versions of 20th century technology) would be enormous, and would soon exhaust all available supplies of coal and wood. A real steampunk society would have to either immediately transform into a fully modern society (with oil, gas, and nuclear power driving devices made of modern, lighter materials) or would quickly become, in all probability, a technological dead end.

To a large extent, it seems like the fantasy genre is quickly moving away from traditional medieval Heroic Fantasy settings and more towards settings inspired by Steampunk. Some modern fantasy authors even combine the two.

Not to be confused with Goth, although the two subcultures do share a similar fashion sense and there is some crossover. Should also be noted that Steampunk is not rooted from the Punk subculture.

Compare with Cyberpunk, which shares some similarities with Steampunk.

For a list of tropes common to Steampunk, check out the Steampunk Index.

The genre is known to drown in superficial imitation, in particular the quasi-Victorian style sometimes called "cogfop" - which is usually defined as "fop with cog glued to the top hat". In that randomly sticking some gears on it doesn't make it steampunk. To clarify a little, as far as hardware hacking or Makerism specifically are concerned, (as opposed to the purely fictional stuff) the Steampunk aesthetic exists on the basis of the idea that something looks good because it is good; i.e., a thing's image is an outgrowth of its (effective) fundamental design. This can be achieved in practice, by adhering to a proven engineering tradition, such as the UNIX design philosophy. This video may also help to explain it. Further betrayed by Regretsy's "Not Remotely Steampunk" section; there seems to be a certain amount of Trope Decay surrounding this subgenre.

Examples of Steampunk include:

Retrieved from "https://allthetropes.org/w/index.php?title=Steampunk&oldid=1949308"
Categories:
Cookies help us deliver our services. By using our services, you agree to our use of cookies.