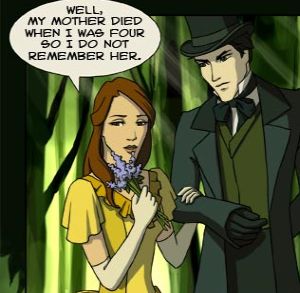 A subtrope of Parental Abandonment: The mother of a character or characters is missing or absent.

Missing Moms are often considered more unusual than a missing father, and may be more likely to have their absence explicitly explained. This might be because a man can technically leave his babymamma at any time after knocking her up (or she can leave him), but a woman carrying a child to term and giving birth, then disappearing, is rarer, especially if it was by her own choice, since it contradicts the Closer to Earth image most cultures have of women. If it was Death by Childbirth that disposed of the mother, this is usually mentioned because it adds an extra touch of tragedy to the character's life.

However, the flipside is that if both parents are absent, the character is far more likely to be obsessed with his or her lost father. Characters who have lost both parents often do not mention the lost mother at all. Missing Moms in general are likely to get a brief mention as to what happened to them, but are far less likely to turn up again in the story, and less likely to be a driving force behind a hero's adventures.

Missing Moms are almost always remembered in a positive light, unlike Disappeared Dads. Expect the father to wax poetic about the times they shared, and to tell a female hero "You look so much like your mother." Death by Childbirth can be a cause of this. The exception to this sympathetic view is the rare cases where the Missing Mom is both alive and willingly abandoned her child, in which case she will probably been portrayed as worse than a mere deadbeat dad. Combine with Disappeared Dad, and you get Parental Abandonment. This can also lead the way to a Wicked Stepmother if the father remarries, or a child's Tell Me About My Mother. If the mother is dead, the surviving spouse is almost obligated to have a Happier Home Movie about her, such as a wedding video or one with the hero as a baby.

Examples of Missing Mom include:

Retrieved from "https://allthetropes.org/w/index.php?title=Missing_Mom&oldid=1919959"
Categories:
Cookies help us deliver our services. By using our services, you agree to our use of cookies.