Everything About Fiction You Never Wanted to Know.
Jump to navigation Jump to search
/wiki/Stephen Sondheimcreator 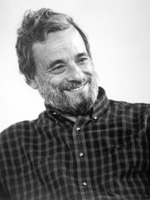 Stephen Sondheim is one of the 20th Century's most respected composers of musicals. He's won seven Tony Awards, an Academy Award, several Grammy Awards, and the Pulitzer Prize. He began on Broadway as a lyricist, and then began writing his own music. Critics of his work complain that the songs are too complex and unhummable, which he went on to Lampshade in works like Merrily We Roll Along and Sunday in The Park With George.