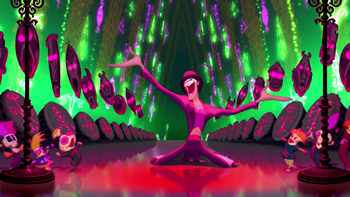 In a musical, the villain always gets the best lines. And the best song.

The Villain Song is an over-the-top, gloating cackle about their Evil Plan, philosophy of life (or leitmotive.) Said philosophy is usually that the world is there for the taking, or that the world has wronged them and they will take Revenge, or that they just like hurting people and nobody is going to stop them. The villain usually gets lots of eye candy to go with their song -- live performers will dance up a storm, while animated villains will get pyrotechnics all around them. If they don't get huge visuals, it better damn well be because the song itself steals the show, and trying to distract from that with a lot of flashy visuals is just asking for a chandelier to fall on someone. This song is usually delivered in a minor key and typically features dramatic evidence of the villain's evil nature, such as playful abuse of loyal minions, taunting of prisoners, or random destruction of incidental locations of the villain's secret lair, usually for the purpose of abusing minions or taunting prisoners.

The nuttier the villain is, the better the song is. The Barnum and the Nietzsche Wannabe get particularly good ones.

This song is almost always a measure of how important the villain is. If the villain has one, they'll get equal billing with the hero, and will probably steal the show. If they don't (e.g. Dr. Corrasco in Man of La Mancha, Charlie Cowell in The Music Man), they're not very important to the plot, and nobody qualifies as the Big Bad. Villains can get other songs where they pretend to be nice, but if they don't get at least one song to strut their villainy, they're (usually) not important.

Occasionally followed up by an Evil Laugh. Compare Villain Love Song, and "The Villain Sucks" Song, which is sung about the villain by someone else. Is sometimes sung as a Dark Reprise. Contrast No Song for the Wicked.

Please note that just because a song is sung by a villain, it is not necessarily a Villain Song. The Phantom of the Opera may have a showstopper in the form of "The Music of the Night", but he doesn't use it to gloat over his villainy. Villain Songs don't have to be personally sung by the villain either, though this is fairly rare.

Examples of Villain Song are listed on these subpages:
Retrieved from "https://allthetropes.org/w/index.php?title=Villain_Song&oldid=1932812"
Categories:
Cookies help us deliver our services. By using our services, you agree to our use of cookies.