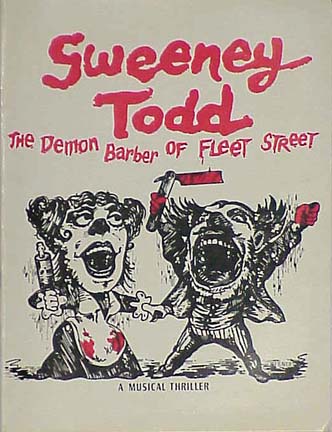 The original Broadway poster. Did you think it was for kids or something?

Sweeney Todd (subtitled "The Demon Barber of Fleet Street"), is a highly-regarded musical with music and lyrics by Stephen Sondheim and book by Hugh Wheeler. It is based on the Christopher Bond version of the legendary story of an English barber who murdered his customers and, with the help of his neighbor Mrs. Lovett, made them into pies. In this version of the story, Todd is out to get revenge on a corrupt Judge who sent him to prison on false charges, raped his wife, and "adopted" his daughter fifteen years ago. Mrs. Lovett smoothly tries to dissuade him from this goal so that he can settle down with her.

The original Broadway production went up in 1979 at the Uris Theatre. It was directed by Harold Prince and starred Len Cariou as Sweeney Todd and Angela Lansbury as Mrs. Lovett. It has since been the subject of many revivals and concerts, and is widely considered Sondheim's masterpiece, and since the latest revival and release of the Tim Burton film version, it has become even more popular than Into the Woods.

Tropes used in Sweeney Todd: The Demon Barber of Fleet Street (theatre) include:
Retrieved from "https://allthetropes.org/w/index.php?title=Sweeney_Todd:_The_Demon_Barber_of_Fleet_Street_(theatre)&oldid=1497193"
Categories:
Cookies help us deliver our services. By using our services, you agree to our use of cookies.