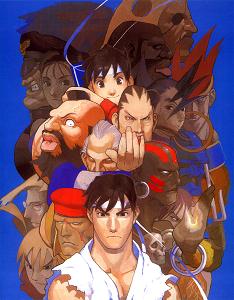 In 1995, Capcom released a long-awaited real sequel -- or rather, a prequel to Street Fighter II, Street Fighter Alpha: Warriors' Dreams (Street Fighter Zero in Japan). With a distinctive anime-styled look based on Street Fighter II: The Animated Movie, Alpha takes place between the first two Street Fighter games, and expands the Backstory of many of the major characters. The game also features returning characters from the original Street Fighter (who were merely computer-controlled opponents, namely Thai-kickboxer Adon and British punk Birdie), as well as characters from Capcom's beat 'em up Final Fight (ninja loner hero Guy and criminal samurai wannabe Sodom) and also introduced a few new characters, namely Dan Hibiki, (the quintessential Joke Character and Take That to Street Fighter copycat Art of Fighting); American soldier Charlie (who was introduced as Guile's missing friend, and was called Nash in Japan); and Italian fortune teller Rose. All of them joined to Ryu, Ken, Chun-Li, Sagat, M. Bison and Akuma.

In 1996, Street Fighter Alpha 2 was released, which expanded upon the previous game, with tighter gameplay, new stages and endings, and five additional characters. Among these new characters were Sakura Kasugano, (a young Japanese girl who idolizes Ryu) Rolento from Final Fight and Gen from the original Street Fighter, as well as returning Street Fighter II characters Zangief and Dhalsim. The American arcade version added Evil Ryu to the roster, along with extra versions of Zangief and Dhalsim (in addition to Shin Akuma and Classic Chun-Li). Alpha 2 was re-released in Japanese arcades as Street Fighter Zero 2 Alpha, which included all the added characters from the American release, as well as extra versions of all the Street Fighter II characters (including Classic Chun-Li), as well as new moves for some of the returning characters and minor changes to the fighting system (particularly in the Custom Combo system, which were easier to performed, but now required a larger Super Combo gauge). Zero 2 Alpha was ported to home consoles as Alpha 2 Gold, which added Cammy to the roster as well (although, she was only playable in the Versus and Training modes at first).

In 1998, Street Fighter Alpha 3 finished off the prequel sub-series, bringing the story all the way back to Street Fighter II's doorstep, and introducing some extensive retcons to the Street Fighter story and characters. Incidentally, Alpha 3 contains the largest character roster of the series, having the entire roster from Super Turbo (with Fei Long, T. Hawk, Dee Jay and Guile only available in the home versions), four characters from the original Final Fight, (Cody, Guy, Sodom and Rolento) Karin Kanzuki, (whose only appearance was on the manga Sakura Ganbaru!) Japanese wrestler Rainbow Mika, and Bison's female bodyguards Juni and Juli, plus every remaining returning character from Alpha 2, making Alpha 3 the game in the series with the largest roster. In 2002, Alpha 3 was ported to the Game Boy Advance adding Eagle, Maki and Yun (with his brother Yang) fresh from their appearance in Capcom vs. SNK 2. Finally, in 2006, Ingrid from Capcom Fighting Evolution was added in the PSP version.

Tropes used in Street Fighter Alpha include:
Retrieved from "https://allthetropes.org/w/index.php?title=Street_Fighter_Alpha&oldid=1833081"
Categories:
Cookies help us deliver our services. By using our services, you agree to our use of cookies.