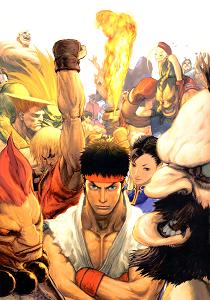 These games (or, at least, series of games) are the most well-known games of the Street Fighter franchise; when most people talk about Street Fighter, chances are that they really mean Street Fighter II. Street Fighter II is one of the most innovative and popular video games of all time; it also brought the "tournament fighter" genre to the masses, and its influence has not waned in the twenty years since its debut.

The game also (accidentally) invented the fighting game definition of Combos, which quickly became a staple of the genre. Fighting game style combos later crossed over into other genres of games.

While not the first Fighting Game by any stretch, Street Fighter II was basically the breakthrough game which defined the genre, with many games borrowing concepts introduced by the game. At the time of its release (and the releases of the subsequent Updated Rereleases), it was heralded as renovating the arcade scene (particularly in the U.S.) as people began lining up at Street Fighter II machines to compete against each other. A Fight Club mentality (not in the "blowing up buildings" sense, mind you) is alleged to have evolved at the time; machines that cost just over $1300 were making that amount back in less than an month.

The second update -- Street Fighter II′: Hyper Fighting (Street Fighter II Dash Turbo in Japan) -- was released a few months after Champion Edition as a countermeasure to bootleg hacks that were created. The hacks which were incredibly unbalanced but featured high speed gameplay and vastly modified the behavior of many moves to the point of eccentricity. Hyper Fighting introduced brand-new special moves, differentiating the movesets of Ryu and Ken, adjusted character balance, and increased the game speed for more intense fighting.

The biggest expansion yet came with 1993's Super Street Fighter II: The New Challengers, which added four entirely new characters -- Bruce Lee Clone Fei Long, British soldier Cammy, Mexican chief Thunder Hawk and Jamaican Dance Battler and music star Dee Jay—as well as more new attacks for the existing characters, upgraded sound quality, and even some new animations for existing characters (thanks to the switch to the newer and better CP System II hardware). The game speed was reduced to the same level as in the original game and Champion Edition. Even though the speed increase was well received in many parts of the world, countries flooded with bootleg hacks assumed Hyper Fighting was another hack. Thus the speed was dropped for Super, which caused backlash from fans of Hyper Fighting, and didn't really acquire its intended audience either.

The next upgrade in this series was Super Street Fighter II Turbo: The Ultimate Championship (also known as Super Street Fighter II X: Grand Master Challenge in Japan). This game introduced Super Combos, heralded the debut of the ferocious Akuma as the True Final Boss, and returned the faster game speed of Hyper Fighting (this time with adjustable settings). Super Turbo is a bonafide classic that is considered to be one of the strongest fighting games of all time; it's still a common sight at tournaments even today, especially in Japan.

All five previous versions of Street Fighter II were later re-compiled into Hyper Street Fighter II: The Anniversary Edition; this version of the game enabled players to fight as any version of any character of their choice (for example: if a player had ever dreamed of fighting a Super Turbo Ken with a Champion Edition Guile, they were now free to do so).

In 2008, Capcom released a remake of Super Turbo on Xbox Live and the Playstation Network. This remake currently holds the longest title name in the series, which is Super Street Fighter II Turbo HD Remix. Developed by Backbone Entertainment, with David Sirlin as the lead designer, this remake features rebalanced/tweaked characters, high definition sprites, all new character and stage artwork (courtesy of UDON Comics), online play, widescreen support, and a brand-new soundtrack created by OverClocked Remix.

In 2017, Capcom announced a port of the 2008 remake for the Nintendo Switch, Ultra Street Fighter II: The Final Challengers, with two new but familiar playable characters, Evil Ryu and Violent Ken, and interchangeable graphics between HD and retro sprites.

Tropes used in Street Fighter II include:
Retrieved from "https://allthetropes.org/w/index.php?title=Street_Fighter_II&oldid=1716739"
Categories:
Cookies help us deliver our services. By using our services, you agree to our use of cookies.