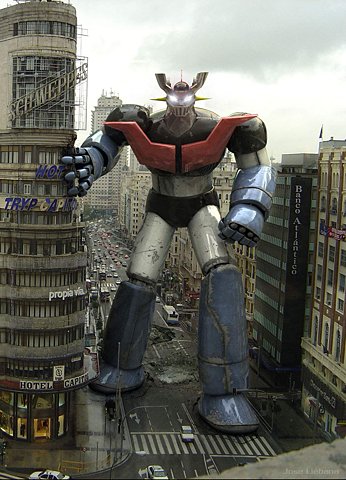 Perfect for those early morning commutes.

This item is available from the Trope Co catalog

Who needs an Abrams tank when you can have a 100-foot man-shaped robot with a glowing sword and a fist that fires off like a missile? There's no argument - fighting robots are just infinitely cooler than ordinary vehicles. Whatever their shape, though, they are all known as "mecha".

The "mecha", or "giant robot", concept is ubiquitous in Japanese pop culture, and is more than adequately represented in Anime. Despite the name, the robots need not actually be "giant" - some are merely human-sized, and some even smaller. Mecha themselves usually divided between the "Super Robot Genre" and the "Real Robot Genre", the distinction typically being where they belong on the Mohs Scale of Sci Fi Hardness, though there are as many different kinds of settings for mecha as there are genres.

The giant robot genre is considered to be the creation of Mitsuteru Yokoyama, creator of Tetsujin #28 (Gigantor) and Giant Robo (Johnny Sokko and his Flying Robot). Both of these featured the early trope of The Kid with the Remote Control. The genre was further defined and refined by Go Nagai. His Mazinger Z (Tranzor Z in the United States) holds the distinction of being the very first piloted giant robot. In that series and others (Getter Robo, UFO Robo Grendizer, etc.), Nagai singlehandedly invented nearly every classic trope of the Super Robot Genre: the rocket-fist, the blazing sword, the amazing entrance from a secret launch bay, and the first transforming and combining robots.

Yoshiyuki Tomino (Brave Raideen, Zambot 3, Combattler V) started out emulating Nagai. Wanting to write a serious war story but under contract to crank out robot anime, he finally said "let's watch both!" and created Mobile Suit Gundam, the first step toward the Real Robot Genre. In its wake, such series as Dougram and VOTOMS refined the concept with robots that looked as though actual military people had designed and built them. Macross, in this context, was merely the first anime to come up with transforming robots that still looked like reasonable examples of military hardware.

Mythology as a whole is also replete with artificial humans and similar automatons (eg. Talos, the great bronze automaton built by Hephaestus), but special mention goes to Hindu Mythology. One of the three barriers the gods set to protect their elixir, the Amrita, was a robot with rotary saws for hands.

In more "realistic" works, such variations as the Spider Tank and Powered Armor are more common.

See also Combining Mecha, where the mecha is comprised in turn of smaller mecha or vehicles, and Transforming Mecha, where the mecha transforms to and from another form. If a mecha is small but still piloted as opposed to "worn", it's a Mini-Mecha; otherwise, see Powered Armor. Walking Tank is simply a bipedal tank with no humanoid design. Spider Tank is a variant which replaces humanoid and animal configurations with an insectile design.

Examples of Humongous Mecha include:

(* Not to spoil anything but the Big Bad in Fallout: Tactics uses robots, including ones that qualify as Humongous Mecha.

Retrieved from "https://allthetropes.org/w/index.php?title=Humongous_Mecha&oldid=1936825"
Categories:
Cookies help us deliver our services. By using our services, you agree to our use of cookies.