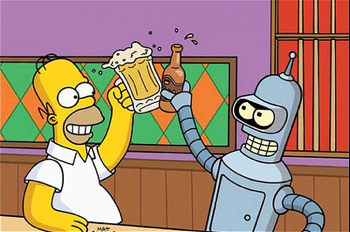 Drinking brings the most awesome of characters together.

The classic crossover started itself off as a good way to make the best of what you've got—so if you have two shows on your roster, it's a no-brainer to have the shows and characters cross over every once in a while, especially if one of the shows is less popular than its sibling.

The popular way of doing this is the "true" crossover, in which a storyline will begin in one series and cross over into the next one, encouraging viewers to tune into a show that may be thematically similar but which they do not usually watch.

For example Buffy the Vampire Slayer had a handful of episodes where the characters would head off at the end, only to turn up in Angel straight after. This also worked the other way, with an amulet in Angel turning out to be vitally important for the last-ever episode of Buffy. (This also highlights one of the dangers of Cross Overs; if you watched Buffy the Vampire Slayer but not Angel, the amulet appeared to come totally out of nowhere to save the day.) Sometimes this is done to provide the lead-in for a spin-off show, as happened with both of the CSI spin-offs.

Alternatively, a single popular character can cross over from one show into the other for a brief guest appearance; this has the effect of attracting that character's fans from the other show without requiring the writing teams to sync up or creating DVD- and arc-unfriendly episodes. This is very common in comic books, in which most characters are part of a larger universe, such as the Marvel Universe or The DCU. It happens less often in TV and movie properties based on comic books, since they are often made by different production companies.

As more ways of developing connections between shows formed, we ended up with lots of different subtropes of crossover. All of these can be seen on the Crossover Index and any examples for those will be found on their own pages.

Not to be confused with tall wagons, nor with the circuits used in loudspeaker systems to split the audio signal into different frequency bands.

Examples of Crossover include:

Retrieved from "https://allthetropes.org/w/index.php?title=Crossover&oldid=1958818"
Categories:
Cookies help us deliver our services. By using our services, you agree to our use of cookies.