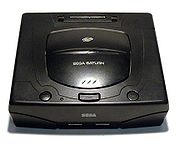 The Saturn had been originally been intended to be a 2D multimedia gaming device. But so many things unfortunately went wrong.

Developers had just got excited about Polygonal Graphics, and Sega realized their next system should have that. The irony is that it was their own Virtua Fighter that got developers excited (not that it was the first, that it was what got attention for polygon graphics). The problem was, the original Saturn design had 3D capabilities that were barely any better than those of the 32X, and the rumoured capabilities up the then-upcoming Sony PlayStation and Nintendo 64 would have left the Saturn eating dirt.

Instead of redesigning the system to make it powerful enough to handle 3D, Sega just slapped on a duplicate CPU and a duplicate graphics card. This is retroactively ironic, because CPUs with multiple cores are the norm in video game consoles and PCs today. But having entirely separate units just upped the cost of the system and the complexity.

While not ironic, the system was also suffering from a legacy of mismanagement from Sega, particularly a lack of communication between the Japanese headquarters and the American headquarters. The Japanese headquarters launched the Saturn without telling the North American branch, so the North American branch created the 32X and got everyone on the bandwagon of that, took their money, and then they were told that the Sega Saturn was being released. The 32X was soon abandoned, which pissed Sega's customers off. Now, the 32X customers didn't trust Sega, which led to all the 32X customers not buying the Saturn.

One really weird mismanagement was Sonic Team hearing that the team developing the Sonic Xtreme was using the engine Sonic Team made for NiGHTS Into Dreams. Sonic Team complained, and the Sonic Xtreme developers had to make their own engine, but that wasn't enough and the game was scrapped. First of all, the creators of Sonic didn't want a developer using their own engine to make a Sonic the Hedgehog game. That's ironic. It's also retroactively ironic, because these days a developer would have to be crazy to stop a game from using a pre-existing engine.

Another odd bit of mismanagement was hiring Bernie Stolar, fresh from being fired by SCEA for his draconian and inconsistent policies, directly into the position of CEO for Sega of America. He then proceeded to start up a "five star game" policy (which basically just allowed him to veto whatever he damn well wanted) and basically took the ax to the Saturn. His policies drove away almost all of the American third party developers, blocked a metric ton of high quality games from being released stateside due to his thinly veiled "no 2D" attitude (ironic, considering that most of the 2D games were miles above the 3D games in terms of presentation and general quality), and downplayed the Saturn as being dead in the water, giving the finger to the relatively small but still sizable fanbase. He ended up getting fired around the launch of the Dreamcast due to completely disregarding Sega's request for pricing the system at $249 instead of $199, as well as completely killing whatever chances it had in the US.

Well from all that, Sega lost about $270 million on the Saturn, and the system sold just 11 million worldwide. It did do well in Japan, mostly thanks to the great advertising campaign involving Mr. Segata Sanshiro, a judo master who beat the living crap of everyone who doesn't play Sega Saturn, and has a considerable library there. Too bad Sega doesn't see the point of localizing them, and porting them to current systems. They would find a great home on the DS, Playstation Network, Xbox Live Arcade, or Virtual Console. Or PCs, for that matter.

On the other hand, the relative lack of ports/remakes for Saturn games has made it a must-own Cult Classic system for hardcore retrogamers, especially now that they can easily look up the good games on the Internet. Too bad said games usually don't come cheap.

As can be seen, the system was really processor-heavy. Not a good thing in that day, when developers were just starting to grasp 3D graphics.

Retrieved from "https://allthetropes.org/w/index.php?title=Category:Sega_Saturn&oldid=1582329"
Categories:
Cookies help us deliver our services. By using our services, you agree to our use of cookies.