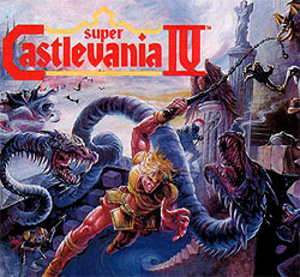 The first Super Nintendo Entertainment System entry in the ever popular Castlevania series.

A retelling of Simon Belmont's first go at Dracula's castle (Just so you know, in Japan, the game is simply called Akumajo Dracula, which is the same title the original game had).

It was one of the first games to appear on the Super NES, and was an exceptional display of the console's layering and Mode 7 graphical capabilities.

Tropes used in Super Castlevania IV include:
Retrieved from "https://allthetropes.org/w/index.php?title=Super_Castlevania_IV&oldid=1558302"
Categories:
Cookies help us deliver our services. By using our services, you agree to our use of cookies.