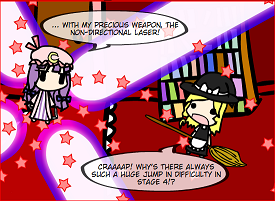 A game that is light and easy through the first 10 or so levels becomes insanely difficult for the last level. Perhaps it's bad game design, maybe it's a sadistic developer, who knows? But, it's the final level that makes you want to throw your controller through the television. Although it technically doesn't have to be the last level, it could just be an extremely difficult level compared to the rest of game. It could even be the third level.

Nintendo Hard games tend to do this a lot. You can get through five worlds unharmed...but then you lose all 99 extra lives to That One Boss in 6-4. This is often made worse by the fact that it is usually more of a challenge to master a difficult section of a game if there is no intermediate difficulty with which the player can "work their way up" to being able to manage that particular section. In games where the spike occurs earlier than the very end of the game, it may result in the oddity that the section at the beginning of the spike gives the most trouble to players, while the final boss (even though it may be objectively more difficult) is taken out in a relatively short time, because by then the players have adjusted to the new difficulty.

Compare Surprise Difficulty where a kid-centric brightly colored game is Nintendo Hard. Difficulty Spike is when a game is easy then suddenly becomes very difficult. There's no ramp up inbetween the easy and hard levels like, say, a medium difficulty level.

That One Boss is a specific instance of this trope incarnated in human (or often non-human) form.

Not to be confused with these other kinds of spikes. See also Schizophrenic Difficulty, for when this happens a bit too often.

Examples of Difficulty Spike include:

That said, the other modes get pretty insane pretty quick as well, one notorious example being the Bombing Run snow level, which, in addition to suddenly steroid-injected AI, involves particularly cruel level design that will take you and your team 2-3 times the time limit to reach the enemy goalpost and score—that is, if the "AI of Death" team doesn't get to yours first.