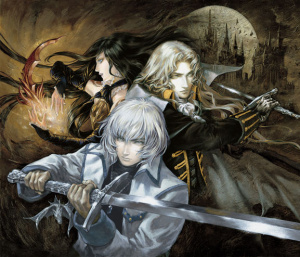 This entry in the Castlevania series, released in August 4, 2010 for the Xbox 360's Live Arcade, and in September 27, 2011 for the Playstation Network. It's the first original 2D Castlevania for a home console since Symphony of the Night, with a heavy focus on online gameplay. The "plot" involves a cursed book known as the Grimoire, where the story of Castlevania has come to life within. However, the written personas of the various heroes and villains of the series have also come to life and must fight to put an end to the curse (or take over the book.) There is up to six-player online coop on both versions, and up to four-player local co-op on the Play Station 3 version, and while players do not have to stick together, it is somewhat encouraged due to the Dual Crushes and the difficulty.

Initial reactions were mixed, between So Cool Its Awesome and So Okay It's Average. However, it has gained a larger amount of appeal due to the DLC characters, stages, and even music.

Besides characters and stages, there have also been 2 music packs of five songs each. If you want more information on the music in this game, check out this link.

Tropes used in Castlevania: Harmony of Despair include:
Retrieved from "https://allthetropes.org/w/index.php?title=Castlevania:_Harmony_of_Despair&oldid=1728266"
Categories:
Cookies help us deliver our services. By using our services, you agree to our use of cookies.