Everything About Fiction You Never Wanted to Know.
Jump to navigation Jump to search
/wiki/The Carscreator 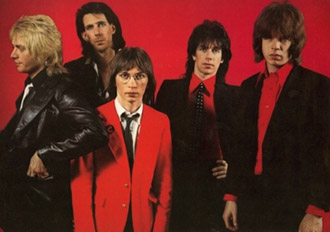 One of the most successful American New Wave/Power Pop bands, and a pioneer in distilling the various strains of New Wave into something that was both progressive and accessible.

Ric and Ben met in Cleveland, Ohio, and moved to Boston in the early 1970s, attracted to its music scene. They formed and disbanded four bands, and met various other local musicians. Finally, they started The Cars on New Year's Eve, 1977. Elliot and Greg had been in their earlier bands, and David was from their favorite Boston punk band, The Modern Lovers.

They recorded some demo tapes, which caught the ear of WBCN DJ Maxanne Sartori, giving them national exposure and leading to a deal with Elektra Records. They went to London in early 1978 to record their first album with producer Roy Thomas Baker, who had previously worked with Queen. He gave The Cars' songs the same lush multi-tracked vocal arrangements heard on "Bohemian Rhapsody", and this became a signature of their work.

They released an album a year from 1978 to '81: The Cars, Candy-O, Panorama, and Shake It Up. The first two are their most Power Pop work, loaded with pop hooks, strange lyrics from Ric, high-tech (for the time) synths and electronic percussion, Shout Outs to bands that influenced them, surprisingly tuneful guitar solos from Elliot, and the aforementioned huge backing vocals, especially in the choruses. Panorama and Shake It Up are more experimental; Panorama is Darker and Edgier, and Shake It Up is Lighter and Softer.

Ric and Ben share lead vocals, and it can be hard to tell them apart. Ric is the neurotic one, Ben is the sexy one.

They took a break in '82; Ric and Greg released solo albums. They reunited in '83, and after eight months of studio tweaking with producer Mutt Lange, released their Magnum Opus, Heartbeat City, in early '84. With this album, they nearly completely ditched their Power Pop tendencies and instead went for high-energy, synth-laden high-tech New Wave. Five songs were Top 40 hits, the ballad "Drive" went to #1, and MTV put the videos for "You Might Think", "Magic", and "Drive" into heavy rotation. They performed at Live Aid, and were superstars... for about two years.

They released a best-of in '85, with one new song, "Tonight She Comes". They took another break in '86; Ric, Ben, and Elliot released solo albums. They reunited in '87. Door to Door, produced by Ocasek, brought them back to their roots as an early New Wave band with a lot of Punk influences. They tried to get away from the mechanical sounds of their previous albums, but they didn't make it. Critics panned it, and sales were modest, nothing compared to Heartbeat City. The tour was difficult, with the band drifting apart and a lot of empty seats at each venue. It was enough to give Ric a nervous breakdown, and so The Cars broke up for what appeared to be the last time in February 1988. 1995's best-of and rarities collection Just What I Needed was intended to be the final nail in the coffin. But the band members remained friends, ready to reunite any time Ric was ready.

Ben died of cancer in 2000. Ric continued his solo career, and in 2010, he put together a set of songs that he really liked. A call with Elliot led to a reunion, and Move Like This was released in May 2011. Greg and producer Jacknife Lee filled in on bass. Move Like This was a return to the sound of the first two albums. Ric died in 2019.

Discography:
The Cars provides examples of the following tropes:
Retrieved from "https://allthetropes.org/w/index.php?title=The_Cars&oldid=1725389"
Categories: