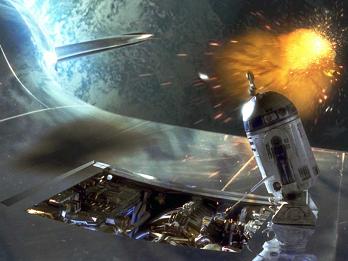 The Smart Guy is the guy in a Five-Man Band whose focus is on intellectual pursuits. This is the team member who will always be prepared, sometimes Crazy Prepared. They will be at the computer doing Rapid-Fire Typing. Expect some fancy talk and Techno Babble from this character. Because their role is about ideas, plans, and being Mission Control, they often leave the action stuff to The Hero, The Lancer and The Big Guy.

Physically they are usually short and wear glasses. They may even be a Child Prodigy. The Smart Guy is sometimes written as mousey and withdrawn. If not antisocial, at least non-social, sliding into TV Genius. Can be expected to play a mean game of chess.

Sometimes the Smart Guy is more street savvy then they appear. If this is the case it usually makes The Smart Guy physically as well as mentally capable. This can be done by making the Smart Guy and The Big Guy one and the same, effectively defying the two stereotypes to the utmost extreme. (see Genius Bruiser). Then there is the path of the Badass Bookworm. They remain firmly planted as the Smart Guy, but are just as ready to fight as everyone else. The results are often impressive, and usually have the advantage of surprise. Who expects the little guy with glasses to be an asskicker?

In rare cases, the Smart Guy may also be a Boisterous Bruiser.

Powers and skills common to the smart guy include:

His knowledge will allow him to find enemy weaknesses and to serve as Mr. Exposition in order to explain plot points to the less intelligent members of the band (and the audience).

In recent years, as casts have become more gender-balanced, The Smart Girl is the one most likely to swap genders. Since the character type is outwardly sexless and non-masculine, turning them into The Smart Girl is not that big a stretch. Mousey, shy and withdrawn work equally well on female characters, and can sometimes be appealing (see Hot Librarian and Nerds Are Sexy). When used in this way, she's usually much less girly than The Chick (see Wrench Wench). In a fantasy setting, she's often the Black Mage, or sometimes the White Mage.

In an ensemble cast, the Smart Guy is usually the last character to have a Love Interest if they even bother to give him one at all. He may or may not be Asexual. He may also explicitly be said to have no luck with women (we are frequently showed just one instance of this as a pretext to at least answer the question and to completely avoid the romance issue afterwards). When present, the shoehorned love interest character is often little more than an uninspired female version of himself, or close to it. Often, this relationship does not last for a number of reasons (a convientent pretext for the smart guy to avoid future romances) or the love interest falls victim to the Chuck Cunningham Syndrome. Invarialby, because smart and well rounded characters are difficult to write, this allows writers to avoid having to develop the Smart Guy character beyond his basic fuctional role.

If there's a Robot Buddy on the team, he's usually The Smart Guy.

Not to be confused with the series Smart Guy.

Examples of The Smart Guy include:

Retrieved from "https://allthetropes.org/w/index.php?title=The_Smart_Guy&oldid=1689295"
Categories:
Cookies help us deliver our services. By using our services, you agree to our use of cookies.