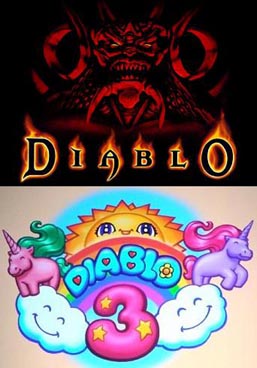 "You maniacs! You ruined it!"

The Different As Night and Day twin of Darker and Edgier, when something is Tone Shifted to be more kid friendly and frothy than the original source. This can either happen to a show over time, or it can be the result of Disneyfication. It may also be done purposefully if it's felt that the series has been getting overly dark. Thus, a Lighter And Softer installment may often follow one which made a point of being Darker And Edgier. Finally, if an adult or more serious TV show or movie has a spin-off aimed at children, this can be the result.

In video games, it can lead to It's Easy, So It Sucks. Also in video games, there is the genre Cute'Em Up, which can manage to be this trope without any loss in difficulty.

In music, this may result in an artist merely recording a Surprisingly Gentle Song, or it could lead to the artist having a complete Genre Shift to a lighter genre.

May result in Tastes Like Diabetes depending on quantity of sweetness and light.

Parallel to Darker and Edgier, Bloodier and Gorier, Hotter and Sexier, Denser and Wackier, and Younger and Hipper.

Examples of Lighter and Softer include:

Retrieved from "https://allthetropes.org/w/index.php?title=Lighter_and_Softer&oldid=1935104"
Categories:
Cookies help us deliver our services. By using our services, you agree to our use of cookies.