Everything About Fiction You Never Wanted to Know.
(Redirected from Universal Studios)
Jump to navigation Jump to search 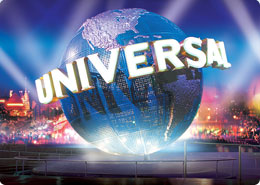 The four theme park complexes owned and operated by NBC Universal, famous for combining thrilling rides with state-of-the-art technology. Most of the rides are based on movies, a large part of them not from Universal's own library. The studio tour dates all the way back to 1912, and the theme park dates to 1964. They are very big competitors with the Disney Theme Parks, and is often regarded as the only theme park group close to it in terms of quality.

The theme parks include:

Two more parks are expected to be built in Dubai and South Korea within this decade. Not to be confused with the actual Universal Studios.

Halloween Horror Nights, an annual event in the U.S. theme parks, has its own page.

Tropes used in Universal Parks and Resorts include:
Retrieved from "https://allthetropes.org/w/index.php?title=Universal_Parks_and_Resorts&oldid=1806334"
Categories:
Cookies help us deliver our services. By using our services, you agree to our use of cookies.