Everything About Fiction You Never Wanted to Know.
Jump to navigation Jump to search
/wiki/Dr. Seusscreator 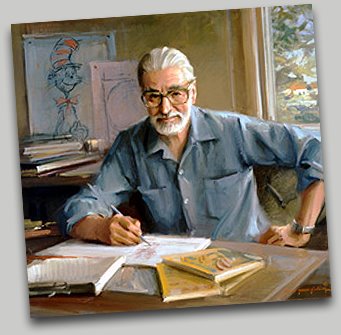 Most of his work liberally uses rhyming schemes, illogical logic, fantastical buildings, nonsensical vocabulary, and sometimes incorporate Anvilicious-ness (READ: The Lorax, The Sneetches), as well as art. This, at the time, was fairly radical and the epitome of advant-garde, though not by today's standards. Seuss was a lifelong inhabitant of Springfield, Massachusetts, and drew inspiration from his surroundings; for instance, And to Think That I Saw It on Mulberry Street took place on the street he himself lived on (note that in real life it's a lot less impressive).

On the less savory side, while he opposed anti-semitism Seuss is also known for being quite racist towards Japanese in his WWII-era political cartoons (here's an example), though he later realized such work was inappropriate and felt horrible about it and was against Jim Crow, even basing one book on getting over small differences (also dedicating Horton Hears a Who! to a Japanese friend). He would probably enjoy that hand-drawn, Animesque spoof in the Horton movie quite a lot!

Speaking of, much of his work has been movie-fied, whether by animation or live-action. The only movie he himself made was The 5000 Fingers of Dr. T. He did collaborate with various directors (most famously, Chuck Jones) in adapting his stories for television, but again, those were TV specials, and not feature-length. When he passed away, the rights to all his stories and characters went to his widow, and no adaptations could be made unless she approved it. After the dismal adaptation of The Cat In The Hat soured her for the casting of Mike Myers (whom she was strongly against) and the adult jokes that clashed with the family friendly nature of the books, she declared that any feature Seuss adaptations will only be animated from now on.

There's also Seuss Landing, a portion of Universal's Islands of Adventure, which features rides, costumed characters and other attractions based on the books.

Also, he seems to be the guy who invented the word "Nerd".

A Biopic is in development[when?] at Universal and Illumination Entertainment, with Johnny Depp tapped to play Geisel.

Books published under the name Dr. Seuss, in order of release:

Books published posthumously under his name:

Animated Theatrical Shorts and TV Specials made during his lifetime:

Live-action films written by Dr. Seuss or based on his works:

Trope-based books include:
Dr. Seuss and his books provide examples of:
Retrieved from "https://allthetropes.org/w/index.php?title=Dr._Seuss&oldid=1921559"
Categories:
Cookies help us deliver our services. By using our services, you agree to our use of cookies.