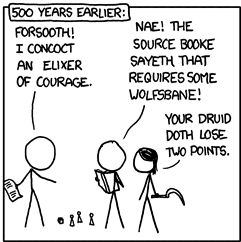 Be the tale set in 1300s Scotland or 1840s Cardiff, appropriately "old-fashioned" English shalt be based on the archaic King James Bible. The formula is simple: addeth "-eth" and "-est" to random verbs, scattereth silent Es like the leaves of autumne, bandyeth about the words "thee", "thou", "thine", "doth", "hast", and "forsooth", reverseth every other occasion thine noun-verb order, and strewth, thou doth be the next Billy Shakespeare!

Yea verily, this doth makest the characters soundeth like idiots complete to any viewer that possesseth pon a verse of uni degree... especially if it goest on for long passages.[1]

This sort of faux-Shakespearian writing is popularly called "Old English". Though it's not. (See Useful Notes: History of English.) More scholarly types may call it "tushery", because of the tendency to use archaic words like "tush".

The silent "e" is somewhat Truth in Television, as after the Great Vowel Shift but before the mid-18th century, there was chaos in spelling, there being no official standards, and the pronunciations no longer being a guide. Words could be spelled however the author felt like spelling them, which is where we get quotes like "...bicauſe noe .2. thynges, can be moare equalle."

"Ye," when contextually meaning "the" and not "you," is actually pronounced, "the." The y stands in for the symbol "Þ" that once represented the th sounds (and looks like a "p" with the line extending up as well as down, if for some reason your browser doesn't render it here).

It can be difficult to find any examples of early modern English used correctly in TV or movies (though please do note any particularly wretched examples you run across).

If the issue is simply that the characters are not ones one might expect to be speaking something like Middle English, it may be simply Flowery Elizabethan English. Magick also makes frequent use of Butchered Englishe. Often combined with Hollywood Apocrypha. Compare Canis Latinicus, Antiquated Linguistics, Law of Alien Names and Talk Like a Pirate. Can cause some Fridge Logic when you realise the characters wouldn't actually be speaking English anyway.

A quick reference to medieval pronouns:

Retrieved from "https://allthetropes.org/w/index.php?title=Ye_Olde_Butcherede_Englishe&oldid=1713282"
Categories:
Cookies help us deliver our services. By using our services, you agree to our use of cookies.