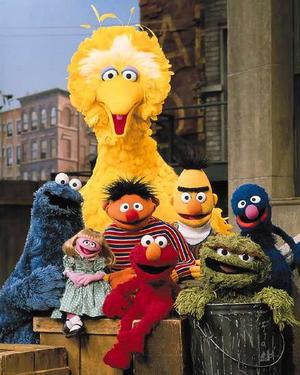 Joan Ganz Cooney of the Children's Television Workshop (now Sesame Workshop) created this hour-long PBS series in 1969. Initially, it was created as a means of preparing young inner-city children for kindergarten. Instead, it got to everybody and became one of the all-time great educational shows.

The show teaches literacy, counting, simple logic[2] and the What Happens Next machine, see below, demonstrate tools of logic and reasoning such as trial and error, process of eliminations, and cause and effect, and social skills through a kaleidoscopic mix of puppetry, animation and short films. In a radical departure for the time, it was designed to deliberately mimic the fast pace and style of TV advertising in order to 'sell' learning to kids: An Aesop-friendly story featuring the recurring characters on the Street would be intercut with rapid-fire 'commercials' for that day's 'sponsors' ("Sesame Street has been brought to you today by the letters A and S, and the number 7...").

The show was -- and still is -- also revolutionary in having an elite squad of educators and child psychologists pore over every single aspect of every segment in the whole show. "Sesame Street" has been called a living laboratory, and the show has been constantly tweaked to introduce new curriculum and improve its educational value. Most recently, the show was completely retooled in 2002 to respond to new child development research. As per The Other Wiki:

Sesame Street underwent an obvious, dramatic makeover... The new format emphasized rituals and repetition, featured brighter, more cartoon-colorful real-life characters and sets, and more exaggerated, simplistic mannerisms in addressing the screen and seeking viewer interaction. Regular segments... are almost identical from one episode to the next, with only minor story details changing between shows.

The set has expanded and contracted over the years but in classic form is a typical New York cul-de-sac, with a brownstone apartment block, a convenience store, a boarded-off vacant lot, and a big open area at one end used as a playground. This urban setting, multiracial human cast (plus guest stars, including Jesse Jackson and Bill Cosby) and multicolored Muppets added to the hip, inclusive feel.

Although aimed at preschool children, Sesame Street deliberately includes enough mainstream pop culture references to entertain older children and parents as well, the better to encourage family involvement in the learning process. A cameo appearance on the Street quickly became celebrity chic, showcasing such diverse stars as Stevie Wonder, REM, Madeline Kahn, the Star Wars droids, Paul Simon, Mel Gibson and Patrick Stewart. All of this has had the side benefit of the show developing a very strong adult fanbase over the decades, as the original audiences have grown up and introduced the show to their children.

On November 10, 2019, Sesame Street celebrated its 50th anniversary, making it the longest-running and most successful children's show in American TV history. For the sake of education, we hope it stays around for at least 50 more.

The human cast has varied over the years, but the core has remained relatively stable: Black married couple Susan and Gordon (and later their adopted son Miles), who work as a nurse and a junior-high science teacher, respectively. Puerto Rican college student Maria and (until 1990) black student and store clerk David. White freelance musician Bob and (until 2003) his deaf librarian girlfriend Linda. Hispanic "Fix-It Shop" owner Luis, who later married Maria. They have a daughter, Gabriella.

When Will Lee -- who played crotchety storekeeper with a heart of gold Mr. Hooper -- died mid-season in 1983, the show tackled the character's death head-on, with honesty,[3] dignity and respect, in what is still considered a milestone of children's programming. His store's ownership has changed hands a number of times -- Mr. Hooper left the store to his assistant David, who sold it to black retired firefighter Mr. Handford following his own departure, who handed over ownership to Japanese-American Alan in 1998 -- but the store retains Mr. Hooper's name to this day.

Various specialized Muppets, created and performed by Jim Henson and his crew, star alongside the humans. The Sesame Muppet characters were initially intended as parts of the "commercial" shorts that would only air on occasion, but they became such a hit that the show was tweaked very early in the season to include them into the core structure. They were developed separately from the rest of the Henson stable and are the property of what is now Sesame Workshop; with the exception of Kermit the Frog, they only very rarely cross over into the Muppet Show universe. Disney's deal to purchase those characters now prohibits Kermit from appearing on the show any more [4].

This show has a very rudimentary character page, with characters having few tropes, if any at all. Please come help!

Tropes used in Sesame Street include:
Retrieved from "https://allthetropes.org/w/index.php?title=Sesame_Street&oldid=1962440"
Categories:
Cookies help us deliver our services. By using our services, you agree to our use of cookies.