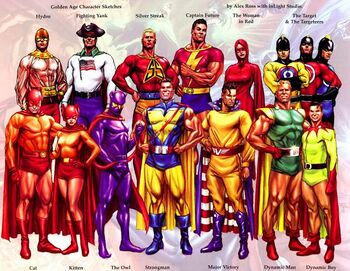 A set of public domain heroes from The Golden Age of Comic Books -- and there's more where they came from.

A character that nobody owns anymore, or was never owned in the first place, that everybody wants to take a shot at writing.

Under U.S. law, works first published in 1922 or earlier are no longer subject to copyright. Before the 1970s, copyright was not automatic in the United States and most other countries, and it was possible for a copyright to lapse if not registered or renewed in a timely manner, so certain later works are public domain as well. In Europe and Canada, the rule is that the author has to have been dead for 70 years. Under the Berne Convention, work-for-hire has a copyright term of 100 years from the date of publication. Additionally, the holder of a copyright may choose to release it prematurely into the Public Domain.

Thanks to the trend of various changes in legislation, copyright terms can sometimes be cynically described as lasting at least X+20 years, where X is the number of years since the release of Steamboat Willie, the first Mickey Mouse cartoon (this is not strictly correct as it was actually the third Mickey Mouse cartoon, but it was the first talkie and the first to be widely released). It is generally agreed that the most recent extension of American copyright duration—the Sonny Bono Copyright Term Extension Act—was enacted at the behest of the Walt Disney Company solely to keep Mickey Mouse cartoons from entering the public domain.

Given Congress' willingness to extend copyright duration any time Hollywood demands it, it is entirely possible that—in America at least—the pool of public domain characters has reached its maximum size and will grow no larger, except by accident or oversight. 2010 marked a year where no new additions were made to public domain in America from works with expiring copyrights, a statistic which repeated for the next few years, and will repeat for several more years unless the law changes appropriately (and as of 2014 there have been two attempts in Congress to pass a law trying to do just that). Worse yet, as of January 2012 it became possible in the United States for works to be taken back out of the public domain, leading to the inevitable conclusion that the pool of public domain characters has not only reached its maximum size, it is likely to shrink. (Ironically, the very same Hollywood corporations responsible for the original copyright durations would probably be the first to fight tooth and nail to keep certain properties in the public domain, if only so that they could continue making movies with some of the characters mentioned below.)

It should be noted that, in general, a trademark is forever. As long as the holder of the trademark is creating some kind of "product" (media counts), and that they fulfill certain requirements (protecting the trademark is generally required), they can demand that the courts enforce the trademark. This is another reason why trademarks have become more common.

One interesting side-note to keep in mind is that there is a difference between copyright (the legal right to control the reproduction of a particular expression of an idea or concept) and trademark (a symbol, character or design which is intended to be emblematic of a particular product or organization and used to identify them in a kind of visual shorthand). Public domain generally deals with copyright alone—meaning that it might be possible for someone to legally write a story with a public domain character, only to find they cannot legally sell their story using that character's name, because someone else holds the trademark. This has happened.

In the USA, the Supreme Court decision Dastar v. Twentieth Century Fox (2003) ruled that a public domain work doesn't violate the trademark of the underlying work. The specific ruling was a narrow one that dealt with "reverse passing off", rather than using a trademarked name. The ruling is generally believed to apply to using names as well, in which case it would indeed be legal to use a trademarked name on a public domain story, but no case that confirms this has reached the Supreme Court yet.

Of course, even if a character isn't in the Public Domain, a good writer can probably find a way to get that character in by creating a Captain Ersatz or an Alternate Company Equivalent, or by utilizing a Lawyer-Friendly Cameo. And if that writer can't even use a character he created thanks to the wonders of modern copyright law, then he can use an Expy. Sometimes, they can just graft that character onto a Historical Domain Character (see below). Of course, sometimes all this can just go too far, when a certain popular character becomes known as a Fountain of Expies.

A character can also fall into the public domain if it doesn't meet threshold or originality—which means characters that are too simple to be copyrighted. For example, a single grey square cannot be copyrighted, nor can a stick figure.

Compare Historical Domain Character, which are people from Real Life; and Literary Mash-Ups, in which entire public domain works are violated improved. Also be wary of examples in general found in the wild as, despite all pretenses, many people don't know much of copyright law in general and those that do, certainly don't know the intricacies and legal interpretations of such. Further, copyright holders often give the impression that they have more extensive rights than they really do (for example, implying that an entire series is copyrighted, when some of it might be public domain). And indeed, for certain instances, people don't often realize the history of certain characters resulting in Reality Is Unrealistic. See Santa Claus.

Keep in mind that producers may arrange for a license to use the name or likeness of a character even if it's likely to be in the public domain, or even if the use would not normally be considered infringement if it were not. A recent example is the agreement between Conan O'Brien's producers and the owner of the Conan the Barbarian literary estate allowing Conan to use his first name as the title of his talk show. TBS apparently thought it prudent to get the agreement even though it's unlikely the literary estate would be so foolhardy as to sue; the defense of even a frivolous lawsuit would run to many times the cost of such an agreement.

Examples of Public Domain Character include: