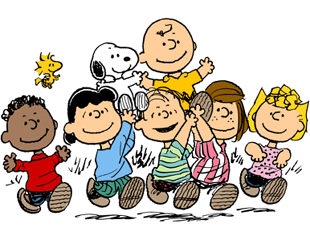 Charles M. Schulz, the only child of a St. Paul, Minnesota barber, wrote and drew Peanuts for 49 years, 3 months and 1 day (1950-2000). The stars of the strip are Charlie Brown, whom Schulz named for a fellow instructor at the Art School of Minneapolis, and his dog Snoopy.

The strip originated as Li'l Folks, a feature Schulz drew for his hometown newspaper. The strip's cast grew as time went on - well, sort of; consensus is their age topped out at about 6 (Linus and Sally) to 8 (Charlie Brown, Lucy et al.) - but adults were always conspicuous by their absence, famously represented by unintelligible offscreen 'wah-whah' noises in the TV specials. (This was due to the editor's restrictions on the strip: to fit the kids in at a decent size in the small panels, he put the "camera" at their height and did away with anyone taller.)

When the kids aren't in school, they're usually playing baseball or having conversations while leaning on a brick wall. Over the years, the strip became famous for its psychological realism, bordering on an all-out satire of more typically sentimental kiddie comics, though it arguably took a turn away from the philosophical toward more direct comedy relatively early in its run (around 1970). Charlie Brown developed from a standard 'lovable loser' into a sensitive and intelligent Everyman, whose relentless track record of failure meant he struggled perpetually with the Really Big Questions. Alternately aiding and exasperating him in his quest were his best friend Linus, a philosopher who sucked his thumb and carried a security blanket, and Linus' big sister Lucy, a bossy, brassy self-described 'fussbudget' who already knew what the universe's problem was: It never asked her what to do.

Supporting cast included Charlie's little sister Sally, a ditz-in-embryo whose literal streak was only equalled by her crush on an appalled Linus; Schroeder, a handsome neighbor boy who - much to Lucy's chagrin - lived only to play Beethoven on his toy piano (with painted-on black keys), and Franklin, the smart black kid who quietly integrated the strip in the late 1960s. 'Peppermint' Patty, the tough Tomboy from across town, and Marcie, her meek bespectacled acolyte, were frequent visitors.

One unique character, The Little Red-Haired Girl, was never seen and never heard (except in certain TV specials, but as Schulz made very clear, those don't count). She was Charlie Brown's Ideal, and thus in a sense everyone's, so Schulz wisely let each of those readers envision her for themselves.

Then there was Snoopy, beagle extraordinaire. Nominally Charlie Brown's pet, he actually lived in an incredibly rich world of his own imagination, acknowledging the existence of 'that round-headed kid' only when hungry. Over the years Snoopy would invent literally dozens of alternate personae, the most famous of which is the WWI Flying Ace, perpetually locked in combat with the Red Baron. Attending and often abetting Snoopy in his fantasies was his little yellow bird buddy Woodstock, who took to hanging out at the doghouse while he failed to get the knack of the whole 'migrating' deal.

The strip spawned about 50 animated TV specials over 40 years (starting with A Charlie Brown Christmas and continuing through installments such as It's the Great Pumpkin, Charlie Brown; He's Your Dog, Charlie Brown; It's the Easter Beagle, Charlie Brown; and so on, ending with He's a Bully, Charlie Brown), as well as four feature films (A Boy Named Charlie Brown; Snoopy Come Home; Race for Your Life, Charlie Brown; and Bon Voyage, Charlie Brown (And Don't Come Back!)), a Saturday Morning Cartoon series (The Charlie Brown and Snoopy Show), not one but two stage musicals (You're a Good Man, Charlie Brown and Snoopy!!!), a few direct-to-video movies, and an eight-episode Miniseries (This Is America, Charlie Brown). The Peanuts characters also appeared in TV commercials for the Ford Motor Company, Cheerios and Chex cereals, Dolly Madison snack cakes, a few regional brands of bread and Met Life Insurance, and believe it or not, a Video Game series. Since Schulz's death (the night before his final strip was published), the comic has kept a place in many newspapers by way of reruns. Specials occasionally keep being produced, such as a series of Flash shorts in 2009, the hand-drawn Happiness Is A Warm Blanket, Charlie Brown in 2011, and a feature-length CGI movie released in 2015. Japanese animation studio Madhouse announced in 2012 that it had acquired the rights to make Peanuts anime shorts, but despite their claims that at least one such film is "out there" (at http://www.snoopy.co.jp/ or in the Snoopy Museum, perhaps?), there is no evidence that anyone has ever seen it.

Peanuts is the Trope Namer for:
Peanuts has its own internal tropes:
Tropes used in Peanuts include:
Retrieved from "https://allthetropes.org/w/index.php?title=Peanuts&oldid=1824859"
Categories: