Aw, Look -- They Really Do Love Each Other 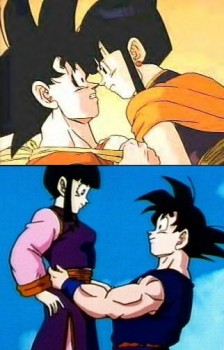 Yes, Goku clearly hates that naggy wife of his.

A couple version of a Pet the Dog moment. Basically, when a couple/potential couple—who spend the entirety of the show yelling at each other, insulting one another, doing things to deliberately upset one another, stabbing each other in the back, etc.—have a moment when they reveal that deep down, they really care for one another. Awwww.

Some couples don't even have these moments as justification for their marriage, however.

Often takes place in a humorous rushing-to-your-spouse's-defense manner, where one of them angrily defends the other against the same kind of insults that they themselves like to dish out.

A similar phenomenon is often seen in brother-sister relationships.

If this relation is between friends then they are Vitriolic Best Buds (the second type). If it is between siblings, then it combines Big Brother Bully and Big Brother Instinct.

If the romance part comes without warning or justification, the trope may fall flat, since it comes completely out of nowhere when the previous context of the story makes it seem like they have nothing to love about each other at all.

Examples of Aw, Look -- They Really Do Love Each Other include:

Retrieved from "https://allthetropes.org/w/index.php?title=Aw,_Look_--_They_Really_Do_Love_Each_Other&oldid=1879153"
Categories:
Cookies help us deliver our services. By using our services, you agree to our use of cookies.