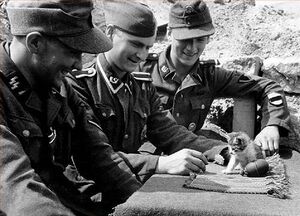 This term was coined by cynical screenwriters, basically meaning: show the nasty old crank petting a dog, and you show the audience, aw shucks, he's all right after all. Often used to demonstrate that a Jerkass is really a Jerk with a Heart of Gold, or, if more limited, that the character is goal oriented rather than sadistic and/or thoroughly evil. If used as an Establishing Character Moment then you skip right past the Jerkass phase. The term "Save the cat" is an alternative.

Note that the pet always survives thanks to this treatment.

A kitten is frequently substituted, especially in anime. No one who likes cats is totally evil, and no one who is mean to them is actually good.

Of course, this doesn't mean specifically petting a cute animal, but it is any sign of nobility within a morally ambiguous character.

Sub Tropes include Photo Op with the Dog, Even Bad Men Love Their Mamas, Morality Pet (a character's entire relationship with a villain is one long Pet the Dog moment).

Compare Licked by the Dog. A few ways to pet the dog include: being an Anonymous Benefactor, I Was Just Passing Through, and Even Evil Has Standards. Demonstrating Moral Myopia can also do the trick, by proving the character is not actually It's All About Me but does regard at least someone else as having rights.

Contrast Kick the Dog, Must Make Amends (when a character tries to undo or atone for having Shot The Dog), Bait the Dog (when this is darkly Subverted).

Truth in Television when you look at some public figures... or if you have an older brother.

Examples of Pet the Dog include:

She, Rita and the kids quickly became Dexter's Morality Pets.

Retrieved from "https://allthetropes.org/w/index.php?title=Pet_the_Dog&oldid=1964924"
Categories:
Cookies help us deliver our services. By using our services, you agree to our use of cookies.