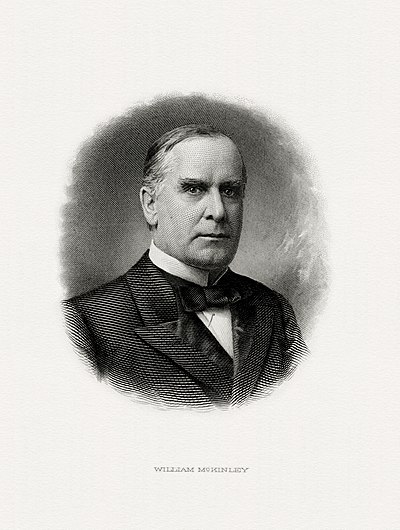 William McKinley is mainly known nowadays as the President whose assassination resulted in the much-better-known Theodore Roosevelt coming into office. He is also one of the more famous victims of violence perpetrated in the name of Anarchism; a few short but eventful decades later, the radicals to really be afraid of would be communists instead. Much like James Garfield before him, technology was right there that probably would have saved him, but several decisions surrounding the operation didn't work out for keeping him alive (the new "x-ray machine" being exhibited at the very expo where he was shot was too untested for doctors to trust it, and apparently they didn't think to do the surgery under the brand-new electric lighting, nor could they use candles because ether was still the best anesthetic available at the time). Similarly, his assassination receives little attention in public memory compared to that of Abraham Lincoln or John F. Kennedy, despite serving longer than the latter.

He was the last American Civil War veteran to be president and he led the U.S in the Spanish American War. He was also the first president to be elected during an Olympic year (the year of the first modern games, 1896), to ride in a car, to have his inauguration filmed, and to campaign by telephone.

A one-minute biography of the man can be found here.

Retrieved from "https://allthetropes.org/w/index.php?title=William_McKinley&oldid=1921135"
Categories:
Cookies help us deliver our services. By using our services, you agree to our use of cookies.