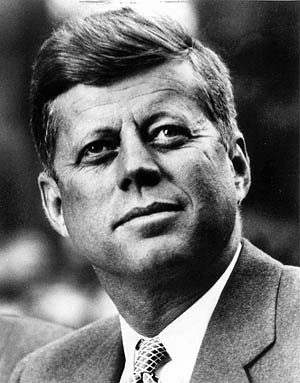 Often called JFK, Kennedy was President of the United States from 1961-1963, whose assassination in office gave rise to a million Government Conspiracy theories. He was known for his particularly inspirational turns-of-phrases in his speeches and overseeing an era of American history rife with social and political turmoil.

Kennedy, the second son of bootlegger-turned-political patriarch Joseph Kennedy, rose to prominence during the Second World War when, as commander of the torpedo boat USS PT-109, he heroically rescued several members of his crew when the boat was sunk by the Japanese, which after the war led into a career in the Congress and Senate, before his successful run for the presidency in 1960. Many credit (at least partially) his defeat of Richard Nixon in the 1960 election to the first televised presidential debate; the new medium favoured the young, handsome and media-savvy Kennedy over the nervous and less camera-friendly Nixon (in fact, polls showed that most people who listened to the debate on the radio felt that Nixon was the victor). Kennedy was also the first Irish Roman Catholic president, in an era where people still openly wondered if a Catholic could ever put his country over Rome.

1960 was actually a very close election indeed, with the popular vote margin (at 0.1%) being the closest of the 20th Century, the Electoral College skewing things somewhat. More specifically:

Kennedy was arguably our second handicapped president (FDR being the first, natch) given that he had Addison's disease, and some have argued that if he weren't wearing his back brace in Dallas, he might have been able to duck and avoid the gunfire.

A youthful, glamorous and invigorating figure, along with his attractive wife Jackie and his young family Kennedy was seen as introducing a new and liberating era to American political and cultural life after the stifling and stuffy days of The Fifties, and his time in office was dubbed "Camelot" soon after his death. Despite this, his short term was filled with crises and political upheaval, such as the C.I.A-directed 'Bay Of Pigs' invasion of communist Cuba, which went belly-up when Kennedy -- pissed at being left ignorant of some details of the invasion, which was a hold-over from the previous administration -- refused to support the invading Cuban exiles with air-support. Publicly, Kennedy took sole responsibility for the resulting failure, which dented his popularity, but privately he blamed the C.I.A and took measures to limit their power and influence -- something which, following the events of 1963, many conspiracy theorists would take note of.

This failed invasion soured relations with Cuba (never that strong to begin with) and eventually led in 1962 to the Cuban Missile Crisis -- in response to this invasion attempt, the Soviet Union began supplying nuclear arms to Cuba, leading to a U.S-led blockade of Cuba. Tensions rose drastically, and it seemed very likely that World War Three was going to be declared any minute; fortunately for the human race, cooler heads on both sides prevailed, and the Russians withdrew (following secret negotiations during which Kennedy promised to remove missiles from Turkey). In the face of a major crisis, Kennedy showed firmness and resolve, and emerged as both a national and global hero. Shortly before his assassination, it was President Kennedy's intention to reach a détente with Cuban Premier, Fidel Castro, and to withdraw all US military advisers from Vietnam.

Despite this international business, the Civil Rights Movement caught him off guard as activists like Martin Luther King Jr. and the Freedom Riders really starting to challenge racism throughout the South. Unfortunately, the South was the Democratic Party's power base so Kennedy was really leery of alienating the southern states until they started getting so brutish on TV, frantically trying to preserve White power that the White House had to respond.

One thing Kennedy is still credited for championing is the American space program. When he issued a challenge to the nation, to put a man on the moon and bring him back to earth alive before the end of the decade, people called him crazy. How crazy? Ask Neil Armstrong or Buzz Aldrin and you'll get an answer. Just remember to duck if you ask Aldrin how crazy the space program was.

On November 22nd 1963, Kennedy visited Dallas, Texas as part of campaigning for his upcoming run for re-election. As his motorcade passed through Dealey Plaza, shots were fired; Kennedy was hit in the head and throat, and rushed to hospital where he was later pronounced dead. Although a ex-marine, Lee Harvey Oswald, was later arrested and identified as the main suspect of the assassination, numerous irregularities in the record -- along with Oswald's own assassination, by a mob-connected nightclub owner named Jack Ruby -- soon gave rise to numerous conspiracy theories about who had really killed Kennedy, involving conspirators as wide-spread as The Mafia, the Soviet Union, lots of Cubans both pro- and anti-Castro (anti-Castros being pissed about Kennedy's failure to support the Bay Of Pigs, widely believed to be the reason the invasion failed; pro-Castros being pissed about the invasion to begin with, not to mention the President and C.I.A's ongoing "let's try to kill Castro as often as humanly possible" policy), the CIA, and Kennedy's Vice President Lyndon B. Johnson, who succeeded him as President [1]. A commission headed by Chief Justice of the Supreme Court Earl Warren later identified Oswald as a "lone gunman". In 1979, the House Assassinations Committee concluded that Kennedy was probably killed as a result of a conspiracy, contradicting the Warren Commission's results, on the basis of a single piece of evidence (a dictabelt recording); this evidence was re-examined in 1983 and subsequently discarded.

For the record, the "Single Bullet" theory is still the official and most complete version of events, as far as current evidence is concerned. Despite questions raised on this subject, there is not enough solid evidence to conclude otherwise. The History Channel conducted a reconstruction a few years ago, using a man in a bucket truck at the height of the 6th floor of the Texas School Book Depository, shooting at a convertible at the correct distance from him, moving at the correct speed, with dummies made of ballistic gel and inserts similar to human bone. The result was the bullet almost, but did not quite match the exact trip of the original bullet, but did go through both bodies (Kennedy and Connelly) at a close measure, slightly deflecting because the bullet in the recreation was off by a fraction of an inch from the travel of the original bullet and struck a different bone in one of the dummies. Please don't start an edit war over this.

Kennedy's legacy is somewhat controversial; many view him as an idealistic liberal icon who would have averted many of the controversies and social strife that bedevilled Johnson in the mid-late sixties (including The Vietnam War and social unrest over Civil Rights), whilst others claim that he was an average president who, had he survived, would have been just as tarnished by these controversies. The idealistic viewpoint also tends to overlook that Kennedy was an inveterate womaniser whose affairs were legendary and whose conquests reportedly included at one point Marilyn Monroe. Some people think that makes a bad president, as if his sex life really makes any difference to running the nation -- although given that some of the ladies he was reputedly connected to also had connections to organized crime figures, unfriendly governments, prostitution and other similarly unsavoury links, it's not entirely prudishness that governs this viewpoint; Jack Kennedy could be slightly... irresponsible when it came to this part of his life, which could have led to trouble down the track. Nevertheless, many fictional portrayals of him tend to lean to the idealistic side.

And concerning the quote above: "For proof that you will never be as badass and pimpsational as Kennedy, go ahead and try that 'Hey baby, let's go have a serious discussion' line on any girl and then come back and tell us how much sex you didn't have." (Cracked.com) Apocryphal stories abound on Kennedy's promiscuity; allegedly he once told reporters "I'm not done with a woman until I've had her three ways."

Kennedy was, and to an extent still is, near worshipped in Ireland. Though not the first president of Irish descent (Andrew Jackson was the son of Scots-Irish immigrants), his Catholicism and interest in Ireland won great affection in that country, especially after his visit in 1963. His sister Jean would later serve as ambassador to Ireland.

The Kennedy family has remained in the public eye for decades and is considered by some to be a Big Screwed-Up Family. Members of the family are well-known for their charm, exuberance and continual misfortune, mostly in the form of untimely deaths for them and their associates; this is referred to as "the Kennedy curse." While the aforementioned Jean still draws breath, JFK's final living brother, long-time Democratic Senator Ted Kennedy, passed away on 25 August 2009, which may mark the end of the Kennedys' public prominence as there does not seem to be anyone in the family who is poised to step into the national spotlight. ...At least, no one bearing the Kennedy surname; the extended family includes a number of notable figures, including Arnold Schwarzenegger who was connected by marriage.

Due to his iconic status, still liable to be invoked by fanboys and wannabes, who thereby tend to make themselves very much liable to the Wannabe Diss.

Note: Please only add examples where Kennedy appears as a character. If he is only shown in order to be assassinated, put the entry under Who Shot JFK?.

Kennedy in fiction
Retrieved from "https://allthetropes.org/w/index.php?title=John_F._Kennedy&oldid=1868916"
Categories:
Cookies help us deliver our services. By using our services, you agree to our use of cookies.