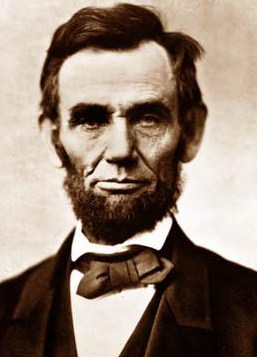 "A house divided against itself cannot stand."

That guy who won the American Civil War, proclaimed the slaves free, delivered the Gettysburg Address and was shot dead at the theatre. He's also known for wearing a top hat and being very tall (the tallest president, in fact, at six feet four inches), and when he for a brief time took direct control of the Union army, showed himself to be a talented military strategist as well. A genial and charming speaker, Lincoln had an uncanny ability to explain complex issues in layman's terms, and his speeches are among the most famous in American history. Considered an untested and possibly radical figure, he is famous for Growing the Beard in office. In many ways he's the only post-Founding Fathers/ pre-Teddy Roosevelt President who's thought of at all. He is almost universally considered to be one of the greatest (if not the greatest) Presidents in American history.

Emphasis on "almost." There is a minority of Lost Cause followers, neo-Confederates, libertarians and anti-federalists who hold different views on the man, claiming that he was a dictatorial leader who trampled on civil liberties and states' rights, set the stage for the centralization of power in America, and launched the American Civil War not out of his moral opposition to slavery, but to maintain his own power base. There are also a number of folks who think Abe Lincoln was a fundamentally good guy, and had the nation's best interests at heart, but that (the rest of) America would be better off today if he had let the South go, arguing that the North and the South are two fundamentally different places. In addition, he had won the election without a single Southern electoral vote -- in some states, he wasn't even on the ballot. (The South was pretty miffed over his opposition to slavery.) He was pretty widely reviled and despised among certain segments of the Northern population as well - particularly Irish-Americans, who alleged (with some justification) that they were being used as cannon fodder for "Lincoln's War".

It is also relevant, if somewhat uncomfortable to admit, that Lincoln was by today's standards a racist. He considered blacks to be inferior to whites. Though he opposed slavery, he was willing at least in principle to allow slavery to continue, believing that it would end on its own. Early in his Presidency he said that he would back any solution to the slavery question that preserved the Union, whether it was freeing all the slaves, freeing none of them, or freeing some and leaving others enslaved. His anti-slavery views became stronger over time, however, eventually crystallizing in two famous quotes: "In giving freedom to the slave, we assure freedom to the free," and "Whenever I hear anyone arguing over slavery, I feel a strong impulse to see it tried on him personally." By the end of his Presidency, he clearly regarded blacks quite highly and on April 11, 1865, Lincoln gave a speech in which he promoted voting rights for blacks.

His memorial in DC is a very popular spot for "inspirational" moments in media, and is much hardier than most other memorials. He is also the only non-British Empire citizen to have his statue in Parliament Square in London.

Was famously born in a log cabin, but not the one you can get tours of (despite what the guides will tell you); that one was built 8 years after he was born. As Stephen Fry once put it, it is dangerously close to the legendary schoolboy gaffe, "Abraham Lincoln was born in a log cabin he built with his own hands."

It is also said that his ghost haunts The White House. His presence is sometimes made clear by appearing, if briefly, before some Presidents and other guests during times of great crisis.

Incidentally, in contrast to most modern-day "deep and smooth" depictions, Lincoln's voice was actually somewhat high-pitched and nasal. For something approaching what's considered to be more accurate, consider this feature, filmed for Time Magazine.

The last living person to witness Lincoln's assassination at Ford's Theater was Samuel J. Seymour, who sat in the balcony box across from the Lincolns at age five, and appeared on the game show I've Got A Secret to relate his story 91 years later in 1956. He died several months later.

One of the things which allegedly mellowed Lincoln out on the issue of race was his unlikely friendship with escaped slave and civil rights leader Frederick Douglass, along with the extreme polarization of the public on the issue, as hundreds of thousands died During the War. After unexpectedly winning re-election in a stunning turnaround, in his Second Inaugural Address (only slightly longer than the one at Gettysburg) Lincoln famously delivered one of the greatest speeches of all time.

Note that he went on to say:

But given the foregoing, he could have just as easily finished up with:

The war was won weeks later. Coincidence? Perhaps not.

Fact: Abraham Lincoln can and, if needed, will, beat you in a fight. Even if you're Batman. Or Bigfoot. In some ways, Abraham Lincoln is almost as much a Memetic Badass as Chuck Norris. In fact, this is where you can go to watch them have a rap battle. Some would count him as the only president to be more Badass than Theodore Roosevelt (and maybe Andrew Jackson, if you ignore the politics). On the other hand, Cracked doesn't even count him among the top five, though the same author later acknowledged the oversight and made an article devoted strictly to Lincoln called Abraham Lincoln: Portrait Of A Crazy Badass. It really depends on how much weight you give the Badass Beard.

Also Fact: In 1842 Abraham Lincoln was once challenged to a duel by political rival James Shields. In dueling, the challenged party selects the place of the duel, and the weapons to be used. Since Lincoln felt the situation was ridiculous he stated that he wanted to use "Cavalry Broadswords of the largest size". He also added that he wanted the duel to be carried out in a pit 10 feet wide by 12 feet deep with a large wooden plank dividing the square in which no man was allowed to set foot over. Shields was going to go through with it, but then saw Lincoln clearing branches with a broadsword and realized how insane the situation had became and backed down.

Also Also Fact: Abraham Lincoln, 140 years before its first usage in ECW, frickin' invented the chokeslam. During his youth as a "wrassler", one of Lincoln's opponents made the mistake of stomping on Lincoln's instep with the heel of his boot. As recounted by noted Lincoln biographer Carl Sandburg, "This exasperated Lincoln so that he lost his temper, lifted Armstrong up by the throat and off the ground, shook him like a rag, and then slammed him to a hard fall, flat on his back."[1]

Lincoln is also one of the few presidents to have an aircraft carrier named after him.

For a one-minute summary of his life along with a picture of him as a Cyborg Zombie watch this video.

Retrieved from "https://allthetropes.org/w/index.php?title=Abraham_Lincoln&oldid=1950845"
Categories:
Cookies help us deliver our services. By using our services, you agree to our use of cookies.